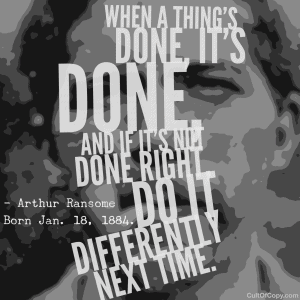 Stop trying to make shit perfect. You won't. You can't. Don't even worry about it being great. Focus on “good enough”.

Publish your alpha, beta, 1.0 stuff. Let the audience react to it. Refine it. Tweak it. Then repost and republish it again later as your audience evolves alongside you.

(Note: like this post, for example. I originally wrote it a year ago to post in my Facebook discussion group. Now I am expanding and re-editing it for publishing on my page and blog.)

In the realms in which we operate, we make our own stage. There is no critic or theater owner or director to appease. We converse directly with our audience of buyers and fans.

What is the cost of failure here? Is there such a thing as failure when the cost is zero? Just do more, do it again, and keep doing it.

The only way to fail is to hold back, thinking that somehow just the right amount brilliance or polish is what will make or break you.

Almost no successful creator of any kind has a career of ONLY occasional perfect masterpieces. The really successful people are the ones who publish work continuously, and some of those pieces prove to be popular and celebrated.

Sure, you'll mess up plenty. And you'll publish those missteps, too.

You can turn those stumbles into valuable material in and of itself by making a lesson about overcoming them.

The only thing to do is to do the thing. Show it to people. Let them watch you do it. Get better over time. Get them to pay to learn what lessons they've watched you earn the secrets of.

Do it. If you're waiting for permission, I just granted it to you…

Or don't. The decision is yours. Personally, I like it when you don't, it really keeps the bar low for the rest of us with more flexible standards. Who needs competition?