“If all printers were determined not to print anything till they were sure it would offend nobody, there would be very little printed.” – Benjamin Franklin, Born Jan. 17, 1706. 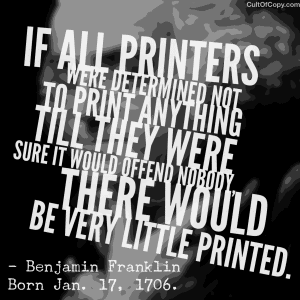 What I love about this is that back in Ben's time, printing was expensive, and a huge pain in the ass. A press was a huge, heavy machine. Moveable type was time consuming, tedious work. Not to mention writing stuff first with quills and shit. Then you get all covered in ink making a pulpy rag on a machine that can crush you.

And publishers were STILL printing stuff that was meant to offend at least some portion of the potential readership.

Do you know why? Because that is what people LOVE TO READ. Look, picking out villains and wrongs to rail against and whale upon with words is a great strategy…

But you want to push it to the point where someone's going to have an upturned nose. You want someone to feel the need to argue, to oppose you.

Because that makes your shit REAL for the reader who agrees with you. You say what they are thinking and maybe fear to say. You are not scared to piss off the people they hate. And they delight in the fact their enemies are annoyed and bothered.

You live on the bloody battlefield of authenticity that they fear to wade into.

They get to be a vicarious eye gouger through your works.

Now listen, despite what some might say of me, I wouldn't say to be offensive for its own sake. I would recommend that you use it as only part of a push/pull ongoing conversation. And it should always be serving a purpose leading people to a goal.

It should offend the enemies of your audience.

Because that binds them tighter to you.

But then again, some people seem to do really well being offensive for no good reason.

So what do I know?