“I was a pretty good imitator of Roy Acuff, but then I found out they already had a Roy Acuff, so I started singin' like myself.” – Hank Williams, Born Sep. 17, 1923. 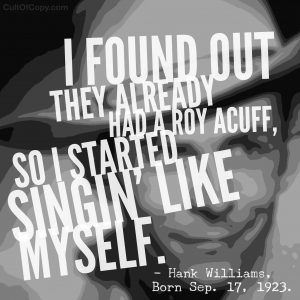 When you get started in a field you want to pursue, it's completely valid to begin as an imitator of the most successful practitioners in that field.

In all likelihood, it was some single shining star in that particular galaxy who inspired you to want to be like them in the first place.

Whether you want to be a country and western troubadour, or a copywriting marketing hack, it's the same.

But to truly come into your own, and build your own thing, you eventually need to become an original. It's essential to find your OWN thing to build and bank on.

This is daunting to people, because they feel it requires a miraculous act of creativity and uniqueness.

What a monumental task it must be to become your supreme self and evolve into a fresh new voice that audiences will huddle around and glorify and buy buy buy from! Woe!

The trick is in ACCUMULATION of sources to imitate. Eventually, weak imitations of a multitude of prior successful people will thin out – imitation becomes influence. Your work becomes a gumbo of quality ingredients: points of view, observations, interpretations, etc.

Seek out influences to imitate from OUTSIDE your field, too. Bring something alien in to mutate the DNA of your work in combinations no one has ever seen or thought of.

And then originally comes with repetitive, deliberate PRACTICE. Whether it's scribblin' or a-pickin' and a-strummin' – work on it as often as you can, for as long as you can. And let those imitations develop and evolve, let your other influences change them.

And what you will see is that you achieve uniqueness because you are a unique combination of influences. Your “originality” is a byproduct of imitating, combining, recombining, and altering what you found in your field and far afield that inspired you in the first place.