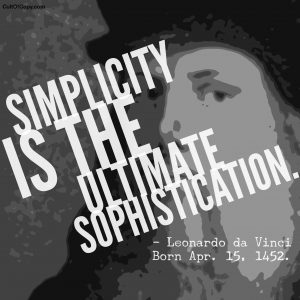 Y'all are making shit too complicated.

Drowning in options and possibilities? Start slapping some arbitrary limitations on yourself and see what you come up with.

Innovation and elegance come from making the best solution out of what you have at hand.

So if you have too much at hand and it's befuddling you, throw some shit out.

Can't decide on fonts? You need one serif, one sans-serif. Done.

Can't decide on colors? You need three. Use one of those online random color pickers. Roll two and pick one or else flip a coin. Done.

Need a photo for a promo? Take three shots and pick the best one.

Need to write a new article for your blog? Give yourself ten minutes to brainstorm topics. Pick one, give yourself an hour to write something. Publish it, move on.

The most productive processes are the ones where you get out of your own way and allow shit to happen – not as some imagined potential thing – but right in front of you with what is in front of you.

The ode is when the poet sits and writes about just one thing they like until it's nauseatingly described.

The still life is when the painter just paints the pile of shit on the table in the kitchen.

The jam is when the musician just picks and twiddles out a tune from thin air using instinct and familiarity with the math of music.

Shit, almost all dancing is this freestyle kind of thing unless you learned some practiced moves.

And what you end up with when you simplify your process is often the kind of beautiful, sophisticated, and elegant shit people call creative genius.

They marvel because they know that there is an endless chaotic universe of possibility and potential, and somehow you chopped it down to just one little piece of awesomeness.

If they only knew the secret:

Y'all are making shit too complicated.