“We imagine that we want to escape our selfish and commonplace existence, but we cling desperately to our chains.” – Anne Sullivan, Born Apr. 14, 1866. 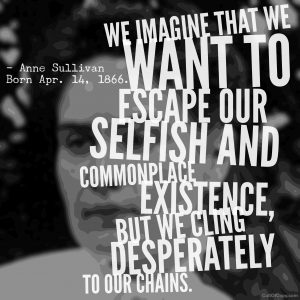 This one is going to be really uncomfortable.

See in that quote where she says “imagine”? That imagination is why we can sell people stuff all day long if we promise it will make their lives better.

Do people really want to escape? No – they want to have already escaped, without doing the work. They imagine a future they feel will be better, but instead of taking action or making plans, they look for the easy out. The shortcut. The purchase of a token that indicates their effort.

Example? We imagine that we want to be fit, but instead of actually exercising, we buy an expensive exercise machine, but it folds up and fits under our bed and there it goes to gather dust and we still feel a little better.

When the problem never gets solved, it remains, always seeking new shortcuts to feed that imagination. Change is scary. Change is hard. Stasis, even if uncomfortable, is certain and known. It's less scary than the unknown and the possibility of failure.

So we hold fast. We cling. We adhere. And we buy token after token that represents the person we imagine we could be – that we SHOULD be.

Now here is the uncomfortable part.

If you're not doing the selling, you're the one doing the buying.