“Diamonds are nothing more than chunks of coal that stuck to their jobs.” – Malcolm Forbes, Born Aug. 19, 1917. 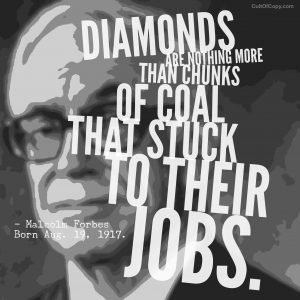 You know what makes diamonds? Start with carbon. That's you. You're mostly carbon. Carbon based life forms, they call us.

And then you add two ingredients: pressure and time.

In the bowels of the earth, we are talking about the pressures of massive geological forces, and time on the scale of eons.

But in our work lives, it takes a lot less of both.

The pressure comes from simply challenging yourself every day to grow in some way. To test yourself against a new difficulty and endeavor to overcome it and expand.

And when you do this, as often as possible, as many times as possible, then over time, that raw and worthless carbon begins to have a certain sparkle to it.

And it doesn’t have to be immense pressure, nor massive amounts of time.

Solve a single annoying problem and share it with everyone.

All the other carbon-based meat bags walking around can tell: lTHIS one can stand up to the pressure. Time and time again. They are special. They are valuable. I should follow them and listen and do what they advise.”

Think of it. Who are the “diamonds” we look up to?

They were SQUEEZED into something special by constantly facing a world that is trying to crush their dreams out of them. That's what the world does.

But they didn't crack. They hardened and became dazzling. And now they are adored, admired, treasured, in demand, and kept forever.

Do your job. Face the pressure. It's not even hard. Just show up. Do your time in it. Try your best.