“Any activity becomes creative when the doer cares about doing it right or better.” – John Updike, Born Mar. 18, 1932. 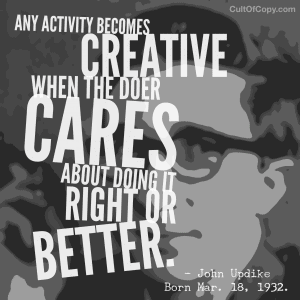 A lot of writers worry too much about creativity, and not enough about consistency of output.

If that’s you, let’s talk about manipulating your mind out of making that mistake, shall we?

Creativity is NOT a primary factor in anything. Creativity does NOT come first, and it’s NOT something you need to have worked out before you begin.

In fact, you don’t even need a good idea before you begin working. Just start working.

Try to make it good.

Try to move the reader emotionally.

Even if it’s just getting them to crack a smile.

That’s where the creativity arises. Creativity is the mind’s response to a problem. But a blank page isn’t a “problem” to your brain’s computer. It’s blank. It’s nothing. It’s got no fiddly bits to go to work on subconsciously.

But when you fill the screen or page and work that keyboard or pen – you’re creating REAL “problems” that have physical attributes. You’re giving the creative part of you something to latch onto. Something solid to grip and manipulate and fix.

THAT will pull your creativity out of you. Expecting it to just come to you out of nothing, when you’re working with nothing – that’s madness.

And it will delude you into mistakenly thinking you’ve got no magic of your own.

It’s there. It just needs coaxing and cultivation. Give it something to work with, and watch it erupt almost involuntarily.