“Within one hour of touching the brush to canvas for the first time, my students have a total, complete painting.” – Bob Ross, Born Oct. 29, 1942. 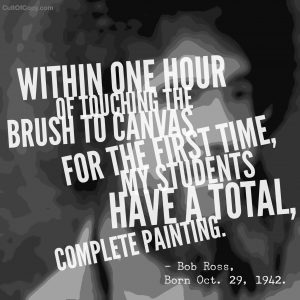 This was Ross's pitch. He empowered people who were intimidated to create art, and gave them the tools and shortcuts to get over that fear.

Were the students' first paintings any good? Probably not, but they came out better than the artist thought it would. It was easier and faster than they would have believed, too.

But the point about the rapid induction that Bob did was that it knocked the big, imposing, intimidating challenge down to a commitment that they were comfortable with. It made it bite-sized. And when you finish, you have a thing that you made. You did it. Good job, champ. I knew you could.

How can you make your own trainings and products follow Bob's lead? How can you lower the bar of commitment and make it simple for someone to just follow the instructions and FIND OUT if further pursuit is for them?

How can you con them into getting their hands only mildly dirty, while delivering a result that they will be more than pleased with? A result that leaves them encouraged and feeling smart and talented and skilled…

Because if you can give them that little brain-flexing “pump” of learning a new skill, you've provided them that addicting little endorphin rush from building a bigger brain.

They'll come back for more. Again and again.

That's why Bob was on the air continuously for damn near forever. And his name and face still sell a shitload of art supplies and lessons, long after he's been gone.

So what valuable result can you show absolutely anyone how to get in an hour or less?

That's your next product.

Beyond that, here’s a helpful step-by-step way you can leverage this trick to move observers from being a prospect to being a participant. Which is miles closer to being a customer…

First identify a complicated but helpful process that your prospect needs to learn. The outcome of that process should be something they deeply desire, but avoid pursuing. Usually BECAUSE that process is so complicated.

Second, break that process down into a series of sensible milestones. Figure out what the “big pieces” are that are necessary to get that outcome.

Third, take the simplest milestone in your list, and break that down into a series of only a few steps. Less than ten. Five is a great goal. It helps if each of these steps can be done in a short amount of time, and even better if one can take a break between each step.

Fourth, create a detailed and easy-to-replicate example that does as much of the hard work of each of those steps as you can manage. Copy and paste. Plug and play. Set it and forget it.

Finally, GIVE AWAY that step by step method of completing that one milestone. Promote it. Encourage people who implement it. Correct their errors and improve your methods to eliminate them.

From there, SELLING a complete process to complete all the other milestones is easy. They’ve gotten their hands a little dirty, but they’ve also seen how much you will help them with any trouble they have. And it has turned out a lot easier than they feared. And best of all, they are already underway. They are partway there. Invested. Committed.

All that’s left is to pay up!