“Recalling a memory is not like playing a tape recorder. It's a creative process.” – Susumu Tonegawa, Born Sep. 6, 1939. 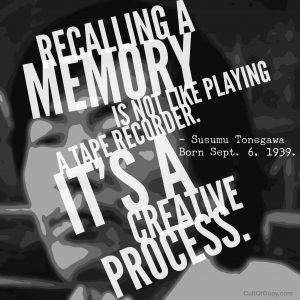 This little secret Susumu shared above is one reason why persuading and influencing people like we do can be so dangerous.

See, when you recall a memory, you're not accessing a permanent record. You are essentially re-experiencing it, and usually at least a little bit inaccurately.

It's as though your brain acts out the memory like a little play in your mind. And details are misremembered, or confused with other memories. But you're imagining the memory anew.

But that inaccuracy then gets written back into your memory. You overwrite the old details.

Your memories can be changed. Not just your interpretation of a memory, but fundamental details of the memory itself.

Because you don't actually “remember” but it's more like “reimagining”.

And that is how you can take control of this process and use it to manipulate the behavior of people you interact with.

By engaging their imagination, then conjuring memories to provide details, then asking the mark to envision future events, tying them to the memories…

You can give people an imagined “memory” of a future event that hasn't happened yet. This feels to them like a destiny. A prophecy that needs fulfilling. They “remember” it occurring and they will then do their best to make real life match that event.

It can be an event like buying what you tell them, followed by opening the box, followed by using it and enjoying it, as an example.

Or it can be used with something as simple as doing you a small favor like leaving a comment.

Like I said at the beginning, this is powerful, and dangerous. But then again, it happens all day every day where people allow TV and other media to do this to them.

Our memories are constantly being pillaged and rewritten – by entertainers, relatives, and advertisers.

You may as well jump in and grab the reins yourself, right?