“For imagination sets the goal picture which our automatic mechanism works on. We act, or fail to act, not because of will, as is so commonly believed, but because of imagination.” – Maxwell Maltz, Born Mar. 10, 1899. 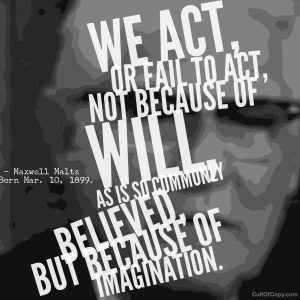 The vast majority of people possess withered and disused imaginations. Having to deal with the real world constantly can have that effect.

It's why fiction exists at all – because specialized imagination engineers can make a ton of money. Writing, drawing, video, etc.

So our need as persuaders, if we aim to get people to act a certain way, is to engage and feed and inspire their imaginations.

And I don't mean that you have to be a genius, or creative, or even very inventive. You just have to be descriptive enough for the reader or viewer to be able to envision your idea sufficiently.

That is how deficient their own capability to dream is.

They can't have a vision or a daydream of their own. They cobble one together from what they can find around themselves.

So if you have access to them, and can communicate across multiple messages…

You can augment, inform, and dictate your vision to their imaginations. Feed it. Fuel it. Fan its flames.

And if you can do that, you essentially are also dictating how they will act or not act.

What do we want them to imagine? Solutions to their problems. A fun and fortunate future. A life they didn’t even dream about before they met you and made it infect their brains.

And it IS like an infection. You can give people a breathtaking vision that haunts their daydreams, and an apocalypse scenario that stalks their nightmares.

And what do they do? Make small decisions day by day to move toward one, and away from the other. Inch by inch. Or leap by leap (if they buy the shortcuts you sell…)

Strong juju. Use with caution.