“I always aspire to that, where it feels like the film was made by the characters as opposed to the filmmakers. I try to be invisible.” – Spike Jonze, Born Oct. 22, 1969. 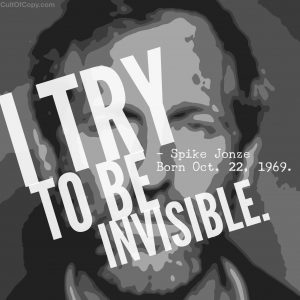 When you create marketing messages for clients, it should be this way, too. You're creating a message from the client to their customer, and the fact that you created that message FOR them should not be apparent. You're Cyrano in the bushes, but you stay hidden.

It gets tricky when you go guru and write your own marketing for yourself.

Here's what you need to do.

You as the face/voice/brand must be visible. You are the source of the content and the offers and the training. You are the human person making the promises and predictions.

But you as the engineer and mastermind of these scripts and sequences and funnels and sales structures – that version of you is invisible.

Now one last wrinkle is when you are a guru in the field of marketing and selling.

Because then you don't want the engineering to be entirely invisible. Because that is what you're selling. So you want to be simultaneously demonstrating your selling, while kind of not appearing to be selling.

You do it with a wink.

Like watching a magician. When you're in the audience, you know that it's not real sorcery – that it's some kind of mechanical trick, but you're voluntarily submitting to being fooled. You know it, and you're volunteering for it.

That's where you want your audience. Aware of there being invisible persuasion happening, but also being able to suspend their inner observer and analyst and sit back and just consume your content like a muggle would.

But then they also want to study it closely for the magic inside. They know it's there, hidden, but definitely in there somewhere.

And here is my final secret on the subject for you…

They will pay you a lot to learn how you do it.

The real trick isn't selling without selling. It's getting people to buy without being sold to.

Here are a couple of ways you can create the ILLUSION of not selling, while actually subtly and almost subconsciously ˢᵗᶦˡˡ ˢᵉˡˡᶦⁿᵍ…

First, leverage public testimonials. Encourage your happy clients to post them where your crowd gathers. Copy and save those. Record video ones when you can. Ask questions that get you an answer that overcomes objections alongside a glowing review. Ala “I had my doubts, but Spike proved me wrong in the best way!”

Second, state offers plainly to your insiders. Save the hype for clients and cold traffic. Acknowledge the savvy of your fans and colleagues. Respect their intelligence. This creates a contrast and sets you up to be a straight shooter who doesn’t use the “tricks”.

Third, leverage the social proof of your effortless conversions. You made a plain non-hypey offer and it sold like crazy. How? Is it because you are a subtle master? No. It’s because people don’t realize seeing those testimonials had a lasting residual effect. It’s not that they weren’t sold. It’s that they didn’t remember the sale already happened elsewhere. They forget because the persuasion wasn’t directly attached to the offer.

BONUS: Testimonials are just one easy influencer you can use in this way to presell your audience. Here are a handful more: case studies, life lessons, gripes about sellers who take advantage of people, vague solution descriptions to specifically described problems which you’ve taught them to diagnose in themselves.

There are more, but those are my main go to choices (as longtime readers may recall now that I have mentioned it, lol).