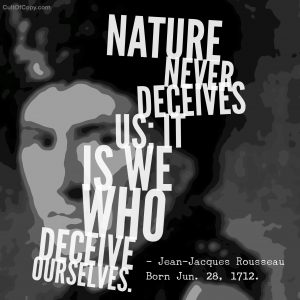 What I love about this quote is that people generally believe it, and that makes it easy to trick them.

“Nature” is an amorphous idea that most people would struggle to define. But it's “real” and it's “truth” and it's what actually *is*…

People have a gut feeling about authenticity and sincerity.

And people believe in information from third party sources that confirms their beliefs or hopes.

They will consider data and research and testimony and anecdote – not just in part, but accumulation itself will influence belief and behavior.

Anything they don't have to take your word for will be taken as a “natural” source of information as concerns that quote.

In a way, the second half of what Rousseau is saying applies to the first half – in that if you think “nature” can't be used to deceive you, you are, in fact, deluding yourself.

The practical application of this comes in how you present the beliefs you want your mark to adopt.

Present “natural” support for those beliefs. Present things that they don't have to take your word for. Like I mentioned before, data, research, testimony, quotes from authority figures, etc.

Hell, even metaphorical fables, or stories, or humorous cartoon illustrations can establish this trusted “natural” confirmation of ideas.

So make the beliefs you want them to adopt APPEAR to be self evident, and you'll have no trouble at all getting them picked up and internalized. They will be taken as obvious and factual.

After all, nature doesn't lie. Right?

We know better, don't we?