“The active part of man consists of powerful instincts, some of which are gentle and continuous; others violent and short; some baser, some nobler, and all necessary.” – Francis W. Newman, Born Jun. 27, 1805. 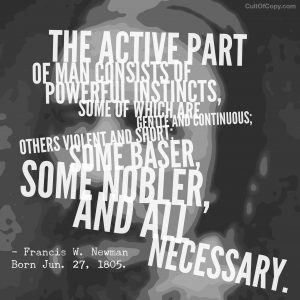 One of the mistakes a novice persuader can make is to attempt to work on the mark's logic.

But that's folly, since logic lies behind the gate of skepticism.

The more experienced persuader knows to evoke and manipulate emotions.

And that is superior because emotion precedes behavior, and behavior can precede even needing a logical justification for it until after it's been done.

But the subtle master works on the level of tickling instinct.

If logic is the outer layer of the human psyche, and emotion is the interior, then instinct is at the core.

It's machine code. It precedes emotion. It demands reaction. It's where fight-or-flight lives. It's where eat-or-fuck lives.

When you can tap into deep human instincts, you can get people to take your desired actions without even thinking about it. Without even realizing they've decided to.

To find where instincts are, look to things like the concept of the “seven deadly sins” they taught weirdos like me in Catholic school.

Lust, avarice, envy, wrath, pride, gluttony, and sloth – these sins all have to do with obsessive behaviors humans can fall prey to over-indulging. Against all logic and desire not to. Why does that happen?

Because these “sins” touch our biological instinctual drives.

Reproduction. Hoarding. Hunting. Violence. Preening. Consumption. Rest. All things we need to do to survive, from the time we were still living in the trees as animals.

Can you harness your desired activity to the fulfillment of one of these instinctual drives all humans share? Acquisition, nesting, propagation of genetic material through reproduction…

If you can, you can inspire action without needing authority or argument or logic or debate.

Instinct can trigger action without reason – action before emotion. It's instant. It's powerful.

And it's kind of irresponsibly easy to do.