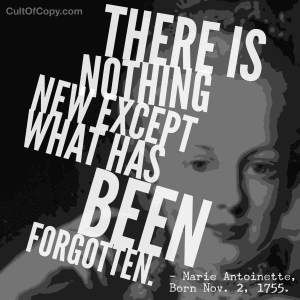 And just think, she said this like 220 years ago. Even earlier, someone else said “there is nothing new under the sun.”

It was true then, and it’s true now. AND IT’S GOOD!

Especially if you sell things.

See, one of the easiest ways to get people excited about anything is to tell them that it’s NEW. Fresh. Previously unreleased. Never before seen. You get to be first! Isn’t that great?!

But it can be a real albatross to try and think up “new” things for people to be interested in.

Originality is a burden.

But it doesn’t need to be. Nothing is really *new* after all.

One of the easiest ways to constantly generate content that FEELS new to the reader is to combine the old with a new perspective.

Most often, this means just adding a modern context. An interpretation of the ancient wisdom made practical for today’s times.

For example, taking quotes from people who lived hundreds of years ago, and giving it a spin relevant to readers today. (Do you see what I did there?)

But let’s look at copywriting and not just content.

In our own niche, creating offers to sell products or services for clients – this trick of making the “old” into the “new” can be done via the classic “swipe file” of old, effective ads.

Whatever angles and pitches worked before will work now, with only minor updates.

Humans don’t change much psychologically, after all. We all want comfort, ease, luxury, etc. We all feel struggles, frustration, and pain.

Connecting that to the product or service that will move them from bad to good is pretty much always the same.

And the trick is, you don’t even have to pretend what you’re doing is brand new, or attempt to hide your references to older things you’re “remodeling” in this way.

There is a great appeal in “rediscovering” the secrets that have been forgotten, overlooked, and passed over by others.

Finding buried treasure from the past has always appealed to people. It’s always seen as a “shortcut” to success today. We always venerate the past, and helping people recapture that glory and benefit from it once again is something they get very excited about.

Nostalgia is yet another avenue people find endlessly appealing. Take what is old and refresh it. Parents like to share things with their kids that they themselves enjoyed as kids. The Disney Empire is built on this.

A recent example from my own life is the Addams Family cartoon movie recently released. My sons watched it on streaming and liked it.

So my wife and I showed them the movies we saw in the 90s.

Which was based on a TV show from the 60s.

Which was based on a comic strip from the 1940s.

And even that “original” version created by Charles Addams was based on older things he borrowed and combined into something that seemed fresh, though familiar to his readers.

The basic concept was “what if an old gothic literary family from the 1800s lived “today” (in 1938 when he created them).

I’ve digressed a bit. By now you’re used to it from me, right?

To get back on track. Don’t be stifled by the belief that you need to *create* anything that is actually new. That desire for the new is for buyers and consumers.

And they hunger for it only because we constantly tell them that what we are presenting is “new” – which to them, it most likely IS if they’ve never seen it…