“If there be anything that can be called genius, it consists chiefly in ability to give that attention to a subject which keeps it steadily in the mind, till we have surveyed it accurately on all sides.” – Robert Quillen, Born Mar. 25, 1887. 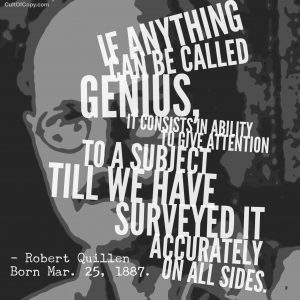 If you look at anything long enough, you're going to notice things no one else normally does. Maybe you'll notice flaws and details only the creator knows.

But if you stare even longer, you'll start to discover things NO ONE else has seen before. Secrets. Connections. Errors. Truths.

Most people get bored with a thing before they even get past the common details everyone knows about. Bored or distracted.

The point is, they would love to have the knowledge that a true explorer has. They just won't or don't or can't put in the time to do it for themselves.

But if you can do it – give something your attention. Give it often. Give it deeply. Look closely. Poke. Prod. Learn.

All observations can be valid if they yield new information. It doesn't matter if the creator of the piece didn't consciously intend it. So long as the revelation shows something fresh and useful.

And in a broader subject, finding and revealing connections and contradictions between key pieces can also be immensely valuable for deepening one's understanding of their field.

Then write and speak about what you've learned. Show them what you've seen. Share those fresh secrets.

And they will call you a genius. Hell, you might even be one at that point. At least on the road to mastery of the subject at a level most others don't reach…

I can't say for sure. But the point is, it's not hard.

It doesn't hurt to do. It doesn't take a lifetime of study or amassing of great skill. It just takes one thing that a lot of people simply will not or cannot do: Repeated and sustained attention on the same subject, until you find unique understanding of it.

Can you do it? Sure you can.