“A movie and a stage show are two entirely different things. A picture, you can do anything you want. Change it, cut out a scene, put in a scene, take a scene out. They don't do that on stage.” – Cabell “Cab” Calloway III, Born Dec. 25, 1907. 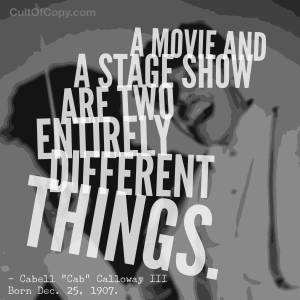 Being able to PERFORM for your audience is something I recommend everyone try and learn to do.

Be capable of providing value off-the-cuff, spontaneously, live or on camera.

Be comfortable speaking to the public.

And if you aren’t, you can do a variety of things to improve. But before I tell you those, I want to make sure you understand why this is so valuable for someone who promotes things.

First, one of the greatest fears most people have – even more so than fear of death – is fear of public speaking.

If that’s you, I can relate.

The first marketing conference I attended As a freelancer, looking to get my name out and drum up business – they had a thing at the end of the first day where you could come to the microphone set up in the aisle and ask the expert panel of speakers a question.

Gentle reader, if you’ve seen me run my mouth on stage or on camera, this may be hard to believe today…

But at that moment, my anxiety flooded my system with adrenaline and I was shaking.

I barely spat out my question, and the sound of blood rushing in my ears was so loud, I had to watch the videos of the conference later to even figure out what the answer to my question was.

I did not come across as a knowledgeable expert in my field.

However, fast forward to a year later, and I am giving my first talk from the stage of a marketing event. I was nervous to start, but I shared that concern with the small audience and encouraged them to yell at me if I mumbled or talked too fast. “Just throw a shoe at me,” I joked.

But after a few minutes of going into my material, I didn’t have any brainpower left to be nervous, and the talk was a hit. One of the best of the conference, I was told.

At THAT event, I closed a half-dozen deals, worked with some well known startups, and got some much needed “guru” experience under my belt.

I came across as a knowledgeable expert.

Because, going back to what I said earlier, everyone in the crowd at the foot of the stage is terrified to get up there themselves.

So if YOU can do it, you’re automatically positioned a preeminent figure. A person of (to them) superhuman confidence.

And that perception of confidence extends to your work. And if you’re confident in your work, it obviously MUST be good, right? This is the mental leap they make. And they do it almost subconsciously.

Now, this is where we circle back to what Calloway said. In a movie, people know that you can “fix it in post” – you can use magic and editing to change things. You can create a fake impression of reality that simply isn’t so. People know this, again, subconsciously.

That is what brings me to today’s point.

When creating video, deliberately endeavor to include as much unedited, live, off-the-cuff delivery as you can. The goal is to create that perception of effortless mastery of your content, and utter confidence in the advice you’re giving.

Long shots, single takes, camera angles and presentations that make it appear as though you’re speaking to an audience and not just to a camera – all of these help.

But this isn’t just a video-only tip.

When you write, the tone and presentation can convey this same perceived confidence and ease.

Don’t write formally. Don’t write too “properly” either. Write casually. Write as though you’re speaking to a friend.

And publish often. So often that it creates the subconscious perception that you couldn’t possibly be agonizing over what to say and how. Because you’re putting things out so often and so well that any other person would struggle to keep up.

You must know your stuff inside and out, or else you could not be a firehose of value blasting them in the face so regularly.

Remember – when you can show that you can make skill and knowledge effortless and abundant, everyone will KNOW you’re a master.

And those who want to hire or learn from a master will have an easy choice.