“You don't know what people are looking for. What you know is what you feel like might be missing.” – Pharrell Williams, Born Apr. 5, 1973. 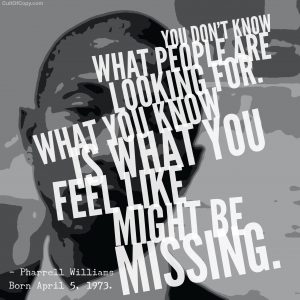 Here is one that people always struggle with. Folks like us know we want to gather an audience, but we don’t know what will attract them, and what will keep them attentive.

Well, I know – but we are using a figurative “us” lol.

So you may ask yourself:

What do I write about? Here's what. What's missing from the content your market is reading? Write about that.

Are hard truths being left out? Are sharp corners being padded over? Are they skipping steps? Ignoring alternatives? Look for what is missing…

Are we talking about sales copy instead? How do you start writing about this or that product? Here's where. What's missing from all the other products that do the same thing? Write about that.

Key features left out? Important accessories not included? Needed information skipped over? Limitations baked in? Obsolescence planned? Look for what is missing…

Take a look at creating fresh products. You can never ever know what people are looking for – Because THEY don't know either. You're not a mind reader anyway. No one is.

But if you want to create something people are excited to see, to discover, to buy and have and own and love, almost like you are reading their subconscious to deliver stuff they always wanted but didn't even know it…

…Then you need to figure out the boring, lame, regular pattern, and then BREAK that shit.

Is the market flooded with paltry microscopic mini-solutions that just give a tiny bit of relief? Respond with a mega-deluxe all-inclusive alternative that blows them all away.

Is the market dominated by many large mega-solutions that dump everything AND the kitchen sink on overwhelmed consumers? Respond with a short, concise, all-killer/no-filler, agile and simple product that can run circles around the lumbering dinosaurs.

There is always a potential pattern of sameness people aren't quite aware of yet, and you point it out by hitting them with what is MISSING.

What THEY'VE been missing out on. They deserved it, they need it, but it’s being withheld or kept from them. Why, by whom? We can fill that in as we go. But as soon as they know something is being LEFT OUT, it triggers an emotional reaction.

Suddenly what they've been settling for is no longer good enough.

Even though they never even knew they were settling, and were perfectly content mere moments ago. It’s not enough now, and it never was, because they feel like they were fed a line and led astray.

And while we are convincing them to come on over to our way of thinking, let's lob a hearty “fuck you” to those evil selfish pricks who have been denying OUR PEOPLE what WE deserve!

And you can do that by subscribing, following, sharing, buying, etc.

Sounds good right? It will sound good to the prospects, too.