“Don't forget that the only two things people read in a story are the first and last sentences. Give them blood in the eye on the first one.” – Herbert Bayard Swope, Born Jan. 5, 1882. 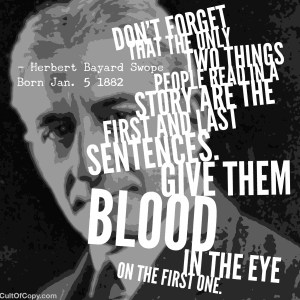 That's why your opener should fuck the reader in the brain, right through their eye socket, planting the seed of your will deep into the womb of their suggestible brain.

Their worst problem/fear/worry?  You've got the final solution to kill it dead.  And it's a secret you stole from conspiring oppressors.  You're sharing it now because you're kindred spirits.  Alike in so many ways.  Fated to meet and unite in this way.

And while they read your words, an intriguing, infectious idea takes hold of their curiosity.  The seed is taking root.  They must keep reading.  That idea gestates and grows.  Curiosity becomes interest.  Interest evolves into desire.

This process doesn't necessarily feel good.  Growth is uncomfortable.  Pains are agitated.  Worries are multiplied.  Anxiety rises.  The problem is so much bigger and scarier than they thought.  It's way worse.  It's too much to deal with.  They can't do it – they just can't…

But relief is around the corner.

With purchase comes release.  Buying your thing will set that idea free to become a real world benefit.  A positive result lies just on the other side of this painful transition.  The problem is real.  It's coming to a head.  It's time to decide or else give up.

Of this they are convinced.  They are committed to this path.  They couldn't shake loose this desire now even if they walked away.  They may as well go all in with you.  After all, you planted the seed.

But as it grew, they fed it of their own flesh and blood.  Their memories are part of it.  Their dreams and hopes now have a form.  The idea belongs to them now.  It's part of them.  And it won't go away until they accept it and comply…

Then your closer should be the pillow talk where you tell them this is right and good, and promise to stick around and fully support them in raising that offspring to maturity.  You're gonna be there to make sure they raise it right.  They'll be oh so happy.

All they have to do is trust you… and give you their money.

It can be hard to get into “blood in the eye” mode if you’re not practiced. Here or some tips to help!

1. Get visual. Use strong imagery, preferably unpleasant. It sets the tone for the harsh truth that is coming up. It can be repellant, but we are going for the rubbernecking effect, where you can’t help but stare at the car crash and are maybe feeling an involuntary disappointment when there’s no blood on the asphalt.

2. Say what they won’t admit to. Be harshly critical. Be ruthless. Be brutal. This may seem cruel, but it’s actually a blessing to them. Because you’re acclimating them to reality, and eliminating the excuses that separate them from it.

3. Rescue them from the carnage. It’s about tough love. It’s about building them up after they are broken down. You can’t sell a life preserver to a person who doesn’t realize they’re drowning yet. So we make them understand that the present is untenable, so they desire a better future.

Which you can get today for a special price and with an exclusive bonus!

If today’s tips help, or if you want to complain or make suggestions, do so below. Thanks!