“To kill an error is as good a service as, and sometimes even better than, the establishing of a new truth or fact.” – Charles Darwin, Born Feb. 12, 1902. 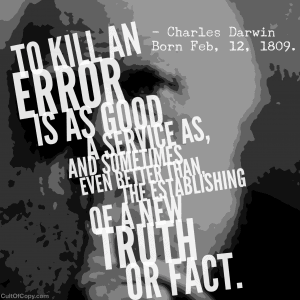 It's not just as good or better. It's way easier, too.

To know what is wrong in the world of your prospect can make you look psychic and empathetic. You can seemingly divine their unseen, unspoken struggles in terms they haven't been able to put into words.

To call out what is wrong in their world positions you as a courageous leader. They fear to speak out themselves, for fear of ridicule and reprisal. For dread of embarrassment.

To explain what is wrong in their world paints you as a problem solver who knows effective solutions. Lord knows they've worried and fretted and tried and failed to overcome their troubles on their own.

You don't have to do shit but point at what is bad, say how bad it is, and tell them why it's bad.

Do this continuously and consistently. Over and over. Remind them repeatedly. Deepen it, broaden it. Diagnose its symptoms and causes and all the fake cures that sleazy snake oil salesmen might push on them.

But that's it… At first.

Then later on, when you think of something to sell them, they will project the opposite onto it. You don't have to.

Their thought process is: that YOU obviously know the problem inside and out, so whatever you recommend should reverse it. Right? Or else why would you even mention it?

This is a conclusion they arrive at on their own – all you have to do is mention a solution, and they see it as the magical missing piece they've been thinking they needed all along.

Finally a recommendation from someone who TRULY UNDERSTANDS the problem, and what it's like to suffer from it!

It's so simple, it's stupid. That's why so many mess it up. Right?