“If you want to succeed in the world, you don't have to be much cleverer than other people. You just have to be one day earlier.” – Leo Szilard, Born Feb. 11, 1898. 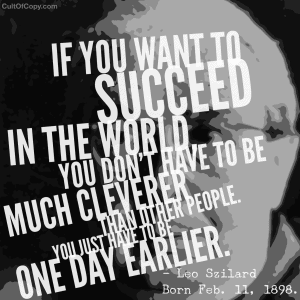 I'm not about to give you some “early bird gets the worm” BS. No rise and grind asshattery. No 10x crushing it.

To be “early” – as in “before the other guy” – all you have to do is a little. Whatever you want to be the guru of. Do a little every day.

Not in isolation. You need an audience of fans, after all.

So more importantly than doing it, turn around and report on what you do. Make a post. Make a video. Collect them all somewhere and allow people to follow.

Because here is the thing. You might not have done whatever it is first. But for all the lazier, slower, newer people just behind you, you are their guy/gal.

You are doing it! The thing they want to do! And you're not some kind of ultra elite “ninja” or whatever. You're a lot like they are – and they can see themselves following your footsteps.

Hell, they can not only SEE your fresh footprints to follow, but you're still close enough that they can see you waving and encouraging them on.

Just like that, you have followers. Just by doing your thing and sharing it. Make breadcrumbs. Leave a trail. Keep making progress.

Eventually, you're a badass simply due to practice and experience and a huge chunk of your market watched you evolve in front of their eyes.

By the time you are a legit guru, you already have an audience who likely PAID YOU to evolve.

Does that sound clever? I don't know. But you don't have to BE clever to do it.

People dumber than you are getting rich by doing it ON ACCIDENT.

What's your excuse for not starting right the damn-hell-ass now?