“Every composer knows the anguish and despair occasioned by forgetting ideas which one had no time to write down.” – Hector Berlioz, Born Dec. 11, 1803. 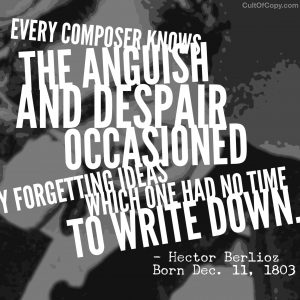 It's a lot easier if you are already writing when you're having the idea.

So write all the time. Even if you don't have an idea. The muse likes to visit when you're already in motion.

I have text files filled with hundred and thousand and maybe even million dollar ideas that I may one day get to.

And you know when that stockpile began?

When I got tired of forgetting things and not acting on ideas. I just started writing everything. And always.

On your phone. On your tablet. On a little pocket notepad. Wherever.

It doesn't need to be catalogued or organized. Make a big messy pile and dig through it later for gold.

The goal isn't to make it nice and polished either. Write it fast, simple, only using enough info as you may need to remember it later. Guess what – you won't remember it right anyway. Write it down anyway.

Even if it's stupid. Especially if it's stupid, write it down, then write down five more stupid ideas just to get them out of the pipeline and make room for some genius to pour through.

Ideas take up space in your brain. Sometimes shitty ones hang around and get stuck, so writing it down allows you to forget it.

And those good ideas you keep thinking over and never acting on? Writing them down makes them solid and real and workable. You can't work purely from your own mind – you need to put it to paper. You ain't Li'l Wayne or Nicolai Tesla.

It's really kind of amazing how much else kind of happens automatically when you're doing that.