“Acting is not hiding to me; it's revealing. We give you license to feel. ‘Hey, she's crying, so it's okay if I cry, too.' That's the most important thing in the world, because when you stop feeling, that's when you're dead.” – Loretta Swit, Born Nov. 4, 1937. 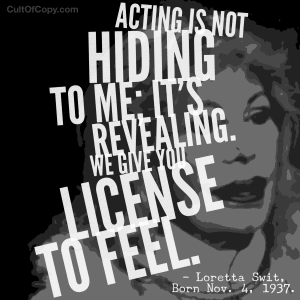 We call know that we are supposed to use emotion to sell, not logic. That’s a first-week copywriter lesson, if not day one.

But I think a lot of writers try and fail at actually PROJECTING emotional content into their readers. We try to use charged up words, sure. But you need some key ingredients in play in your writing BEFORE emotion can transfer from the screen to the brain of the reader so they are FELT.

Today, I’m going to reveal how fiction writers do it, but how it will be even easier for you as a copywriter to learn it by studying ACTING.

The biggest trick to doing this easiLy is through CHARACTER. Monkey see, monkey do. If we can present a relatable character, get the reader to empathize with them, then we can use that character’s emotional responses to change the reader’s mood. This effects HOW they consume and classify the subsequent information.

In fiction, the subsequent information is usually plot development, all working toward a foregone ending we are working toward. In sales copy, we are usually about to deliver positioning, pricing info, problem agitation, etc.

We aren’t just giving off “safe” make-believe details. We are literally dropping factual information – true, but curated and constructed – so that the moods our fiction raises: anger, frustration, hope, etc. – color how that information is consumed.

The “voice” of the sales page tells a story of heartbreak and heartache – the prospect feels it, and we describe what those same problems are like for all. The voice expresses anger at the “system” that has victimized them by prolonging their needless suffering. The prospect feels anger themselves for their own indignations suffered under that same system. The statistics here prove it!

But we give them a place to vent their feelings, just like a novel or movie does. With a reversal, a happy ending where the good guys win. We just make it a cliffhanger that only resolves when the buy button gets pressed.

I digress. So the fiction writer’s approach to this tends to go about it with internal dialogue and lots of telling and describing. That can work in a novel where you’re getting a whole new world of imagination built up around that character.

In copy, we don’t have that luxury.

So like with a movie, you’ve got a few seconds to hook the viewer in and make them empathize with your “hero” – here, the “character” making the offer.

So I recommend studying method acting in particular. It’s a way that actors learn how to adapt their own real life emotional experiences to give realistic performances of emotions someone else made up.

For us, that is valuable so we can learn how to first get ourselves as writers into authentic emotional moods when we are writing out material. How we feel comes out through the words. That gets picked up by the reader just like an actor’s performance.

The next acting bit worth studying is how an actor can create a character through small details, movements, behaviors, ways of saying things, facial reactions. Then as a writer, you want to learn to portray your characters in THAT way, instead of how a novelist might.

For example, consider “when my boss told me I was laid off, I was mad!” That’s literary, but not cinematic. Try this instead – “he was sweating and nervous when he told me they had to lay me off. My heart skipped a beat. I swallowed so hard my Adam’s Apple plopped into my stomach, already filling with boiling acid. My brow furrowed, and BOOM I slammed my fist down on his desk so hard he jumped.”

It’s wordier, and in editing, I would trim it down. But there is so much more of a portrayal there – it helps your prospect see it in their mind’s eye. And remember, monkey see, monkey do. If they can visualize it, they are more likely to FEEL it as well.

That scene I wrote there is how you would think like an actor – to bring “he’s mad at his boss” to life. With visual metaphors you can feel internally. With facial expressions. With visual details and physical action. Even sound effects.

I hope this helps, because like Loretta said, if you’re not lacing your copy with authentic emotion and PORTRAYING it, it’s just dead. Lifeless. Ineffective.