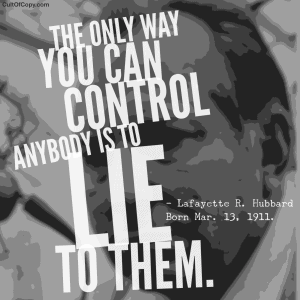 Get out the Preparation H because every time his topic comes up, some people get really butthurt.

Look, what we do is lie. Persuasion is deception. Selective application of the truth creates a false version of reality. That's inherently and inescapably deceptive. There is no clean way to be a deliberate persuader or influencer.

If you told people the truth, you would give them a choice. They can choose to believe truth, or they can decide that they don't. That's how real truth works.

But that's not what we do. We aren't dealers of truth. We don't give choice. We give the ILLUSION of choice. We conceal or remove all the possible choices that don't fit our own goals.

Now listen, don't feel bad. Whoever told you that lying is automatically bad was full of shit. Fiction is lying, and people love fiction. Being nice to comfort someone when you don't really mean it is also lying. Lying can 100% be a good thing.

And people tell lies thousands of times, every day – even people who think of themselves as always honest. Hell, people even lie to themselves.

Some scientists even think that our ability to imagine, to create fictional narratives in our minds, is what led to our evolution to sapient, self-aware creatures.

But yet, people deny the saturation of lies in human communication.

Don't believe me? Think about WHY you may think lying is automatically bad? When did you learn it? Who told you that? Your parents and other childhood authorities? Can you think of a reason they might instill such absolutes in their young charges?

Because if kids lie to you, you can't control them. Now, ask yourself if these same authority figures who instilled this rejection of dishonesty – did they hold to that same standard?

Why? Because you're getting the kid to do what's good for them. Is it the best way? It depends. Do you want to be in control? Because the truth doesn't give you that. Honest truth has zero control.

Lying gives you total control. The more well crafted the lie, the more control you can exert on the outcome of telling it.

But again, lying is NOT always bad. Say it. Learn it. Believe it. Embrace it.

Is telling kids about Santa bad? That's a bold faced insane lie that parents tell their kids right to their faces, deliberately to control their behavior, and no one feels the least bit fucked up about it. If that's not a bad thing, then admit to yourself that sometimes lying is GOOD.

What makes the difference?

It depends entirely on what you want for the other person. If you leave them better than when you found them – happier, richer, stronger, smarter, whatever – then you did well.

If you want to harm them, it's not the lie that did it. Lies are just a communication tool. Bad people can use them as well as good.

But you MUST accept that to persuade is to lie. Own it. True mastery won't ever be yours if you don't.

No guilt. No fear of a naughty word you were raised to believe was a bad thing you must never ever do.

Have your best intentions to help people. Pledge to not harm them. And then get to work crafting a story that they will buy and accept that will put positive change into their lives and leave them better than you found them.

Because the truth is not always hopeful, and sometimes better lies can come true if you can get people to believe them.