“A strong emotion, especially if experienced for the first time, leaves a vivid memory of the scene where it occurred.” – Algernon Blackwood, Born Mar. 14, 1869. 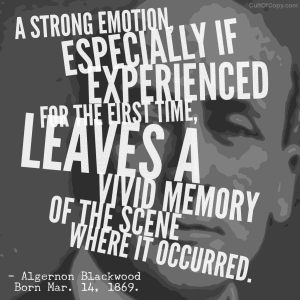 You ever see that movie “Inception” where that team of mental mercenaries implants an idea into someone's memory, so that they mistake it for their own?

I can teach you to do that and you won't even need a weird little suitcase IV drip machine or to plan a kidnapping or anything.

Just like Blackwood is saying in today's quote, remembered scenes and emotions are tied together. But the trick is that you don't have to read someone's mind to get their memories, and this actually can work backwards.

Meaning you can give someone an idea and an emotion, and tell them where you want them to remember to experience it, and when they do, they will feel like it came from them.

The way you do this is with a certain kind of message. You ask them if you can guess what their day is like.

Let's say you know your audience are day jobbers who would love to quit and go freelance.

So they wake up before the sun with a buzz saw alarm tone. Take a shower, shit, shave, dress in unattractive clothes and head for the twice daily traffic jam.

They spend way too much time there, in their car, which could be cleaner. Listening to the same boring conversations from the same boring radio douchebags playing the same ten pop songs on loop. You look at the same billboards so often you can recall the phone numbers from memory.

You get to the office, clock in late again, and get some shitty burnt coffee, say hi to coworkers you don't really like, and wait in your cubicle under flickering puke green fluorescents that flicker.

Eventually your manager comes in with his bad breath and dandruff and spits in your ear about how much pussy he got this weekend and reminds you how urgent those sales reports are – like he's not fucking keeping you from doing them by making you pretend to laugh while he pantomimes humping the copier to give you an unwanted visual on his sordid sexual conquests.

And hey, maybe your manager wasn't as bad as mine. But I'm sure you can think of something they do to waste your time and kill your soul.

Lunch is literally your only oasis of enjoyment.

And hey, four hours after that lunch, you can go for round two in gridlock, see the same billboards, and listen to the afternoon radio douchebags tell the same jokes and play those same ten songs as you stare at deja vu skyline, festooned with the backs of those same billboards you've read a thousand times.

Then you get home, eat dinner, fuss your kids, kiss your spouse, and fall asleep exhausted, just to do it again tomorrow, every weekday, forever.

Now, admittedly, I just slapped the above together quickly. If it was real copy, I would edit it down and pretty it up.

But as far as effect, you should be able to spot it.

What it does is make a lot of general, broadly applicable guesses about the daily routine of my prospect. The commute, the cubicle, etc.

THIS IS KEY SO TAKE NOTE…

Those are there because they make the reader “correct” me mentally and fill in their own details. BEING WRONG in the copy in a SHARPLY distinct way drives the reader to participate.

This sets them up to recognize their rejection of this life at every level of experiencing it. They desire something different at every separate moment, and they feel it each day.

This is only part of it, of course. But..

What do you think their reaction would be if you offered something that counteracted this, point by point, moment by moment?