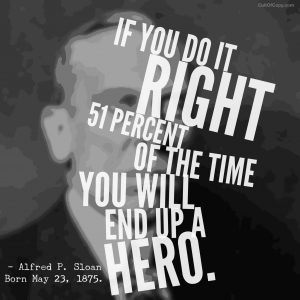 I want you to know how low the bar is set. It's set so low that primarily what it takes to succeed is basically just persistence.

Whether by discipline, or by desire, or by willpower, or by mental illness, or by being driven, or by being compelled – it doesn't matter.

Just do a thing a bunch of times, and you will not only succeed – you'll likely even be recognized as a success.

EVEN IF YOU FAIL AT IT almost HALF THE TIME.

What people recognize and remember is effort and action and repetition. Outcomes and results are not nearly as sticky in their mind. So if fear of public failure is preventing you from taking action, stop letting it.

The thing is, to determine if you're doing anything right at least 51% of the time, you should do it at least 100 times. You can fuck up for 49 of those tries.

After 100 tries, evaluate. How did you do? Probably even better than 51%. Just because by human nature, if you do something again and again, you literally cannot help but get better at it. Your body and mind are evolved to do this. It's pure biological adaptability.

Do something 100 times – in our case that would be not just writing, but publishing. Put 100 pieces out there. Don't just hit post, but share them. Spread them. Bother people with them. Chances are, you'll be a hero.

Using just 100 tries, if you work a little every day, that's three whole chances to be a hero per year, plus a little extra.

Being the hero is the big win – and you could have three per year! And still fuck up almost half the time!

It's not hard. But it takes something very simple that many people just do not have, or are unwilling to do despite not having it: the ability to show up and work every day, over and over, even if you're fucking up and getting no result yet.

And I've been there. I didn't get my shit together until my 30s and I'm still not great at it. It can be super discouraging to do something even 10 times and not succeed. But now that you know the numbers (even these arbitrary ones) you know you can fuck up a whole lot more than 10 times and still succeed.

Are you failing enough? Are you trying enough? How many days in a row have you given your time and sweat to your dreams? If it's not at least 100 before quitting, fuck you. You're not even trying.

And here is the harsh truth – you're not worth helping if you're not even trying.