“The tragedy of bold, forthright, industrious people is that they act so continuously without much thinking, that it becomes dry and empty.” – Brenda Ueland, Born Oct. 24, 1891. 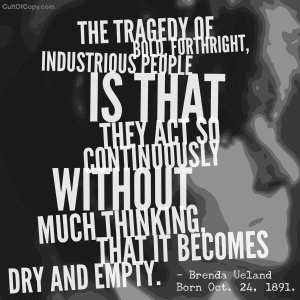 I’m so bored of the public positioning of “hustle” as a virtue, which one MUST pursue to find success.

Success, to me, is a combination of two or more of three things.

Having any combination of these items does not in any way guarantee success. But any thing you can think of that IS a recognized and verifiable success will have at least two of these.

But take a look at that list. Which two can you control? Only the first two. The last one is up to the universe, and heck, sometimes it ends up not being there at all, and yet success can be achieved despite it.

So it’s up to me and you to put effort into those two things: idea and execution.

And the reason is obvious if you stop to think about it.

Because everyone is theoretically capable of “hustle” so it has the widest possible appeal. And failure can be blamed on unwillingness to hustle ENOUGH or on quitting before the hustlemania inevitably pays off.

But that’s bullshit. Digging ditches requires hustle but I don’t believe it’ll ever make one a financial success of any great degree unless you luck out and strike oil or diamonds or something.

Execution only makes a difference if the underlying ideas are good. And ideas are harder than execution. Right?

Presumably, telling the public that you need a great idea would drive down sales for the success coaches and guru-ocracy, I’d guess?

But ARE THEY RIGHT?

Are ideas so hard to come by? Ideas that can spark content, products, offers, and more? Profitable ideas that come endlessly, waiting for you to pluck out the ones that look juicy?

All you have to do is think. Think. Observe. Consume. Analyze. React. Combine. Compare. Contrast. Then, regurgitate it.

Feed your brain, and think. Find as many sources as you can, and feed that mind of yours. Things from your industry, and things outside it that inspire you. Whatever that may be.

Then feed. Always. Never stop. Because it’s like a fire. It can fade and even go out if all you do is hustle hustle hustle without ever tending the flames and adding more fuel.

But don’t just feed it. Transform what you get by passing it through your own lens. Use one thing to talk about another. Let your passion create an interplay between your genuine interests and enthusiasm, and the concerns of the niche you’re in for the money. Give it some thought. Decide what is good, and what is bad, and what is interesting, and what is boring.

Then put it out there. You will attract an audience. People want opinions on what is good, bad, interesting, and boring. It helps them make good choices about spending money. But they gather, this audience.

And that is step two of this process…

Engage that audience who come to consume your thoughts. Interact with them. Talk to them. Learn their problems and concerns and roadblocks.

Once you do, you can create amazing, valuable, and profitable products and services simply by giving those people the help they are asking for.

Hustle without a good enough idea is unhealthy. It will kill you. It will wear you down, and wipe you out, and never give you the comfort and happiness that you’re hustling for in the first place.

The point is to achieve an exchange of value. To build and benefit a community around that relationship. To make it last and be as much about fun as it is about work.

That is the way to harness a healthy HUSTLE in order to execute on valuable ideas that will result in success. With or without luck.