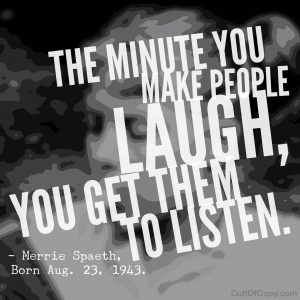 Aside from sharing an enemy, sharing a laugh is the quickest way I know to create rapport with a stranger.

And it doesn't have to be a belly laugh. It could be anything as simple as a smile and a nod of recognition.

In case it's not just obvious common sense that people enjoy laughing, and would therefore enjoy funny people – there is, of course, a chemical and biological response happening.

And that's why it matters for we persuaders.

Just as having a villain can let you play with the emotional chemicals of fear in the reader's brain, humor can allow you access and control of their GOOD feelings, also.

And the more varied the emotional responses you can coax from a reader on demand, the more they will come to TRUST you.

Therefore, the more you can reliably control your audience's emotional responses, the more likely it is the will let you do it again I’m the future.

Creepy, I know. But hey, we are talking about HUMOR!

How can one be funny – in almost every circumstance – without fear of offense? That is the big “gotcha” in today's immersive communication environments.

People can and will take offense to almost anything that feels like a judgment from outside.

Avoiding that is simple. Make yourself the target of your jokes. Your mistakes. Your shortcomings. Your limitations. Embrace them and use them as a foil often.

Because it is always safe to laugh at someone when they are in on the joke. That is your foot in the door. Mock yourself. Make yourself the butt of the joke. Show them it's okay.

But don't stop there. Once you've used self-deprecation to BEGIN the relationship, you can segue into using humor as a WEAPON to attack targets in your reader's environment that can help draw them toward you.

1. HYPOCRISY – point out the differences between what your competitors/rivals/mutual enemies do, and what they say. This creates a reason to distrust the people you want them to distrust.

Warning – best not be guilty of this same hypocrisy yourself UNLESS you've already made yourself into a joke over it. (That's why it's important to START with self deprecation…)

2. HAUGHTINESS – point out when your opposition is stuck-up, snooty, presumptuous, and entitled. It's always super easy to get a laugh by making fun of someone who takes themselves way too seriously.

Again, when you start with self-deprecation, it makes it hard for others to do the same to you in return. It also positions you as the opposite: down to earth, relatable, approachable. Of the people.

3. HATERS – people who are belligerent and negative and attack you and your audience and your shared values, find a way to flip it on them and mock accordingly. It doesn't even have to be valid – you can get humor from a hater by mocking their grammar or stupid face, for example.

It's not about countering them on substance. It's about making a clown out of them in front of the audience. It increases familiarity and shows that you have self-confidence.

4. HAS-BEENS – point out a stubborn grip on the fading past. Fax machines, pagers, dot matrix printers, flip phones – we in the technical fields have endless ways to make mockeries of the difficulties in the past ways of doing what we do.

And again, it ties to self-deprecation – “I remember when…” And it allows you to then position yourself as an advocate of change to easier, newer, faster, better. Which is useful to sell things.

5. HARBINGERS – things that have people buzzing, like they will be revolutionary game changing evolutions of the universe itself for all time! You can mock these – because people have uncertainty about the future. And making them laugh about what they fear will again, flood their brains with tickle juice.

The point of doing this is, of course, if what you sell represents the old-school, reliable, proven angle in your market. But here is the best part – if someone calls you out later if you get proven wrong, attempting to paint you as the hypocrite – just own it!

Admit it. Make yourself the butt of the joke over it and you actually INCREASE the relationship, because you're honest and actually care.

6. HAGIOGRAPHY – some people will have to look that up, and that's okay. I aim to feed your brain, lol. I digress. Whatever your market is, there are heroes. Traditions. Old chestnuts.

The ones who came before are maybe up on a pedestal, and fawned over, and glorified – made into saints. Especially after they die. Mock that. Make fun of blind allegiance, or ignorance of true histories. Poke holes.

The point isn't to drag anyone's heroes into the dirt – just to make them mortal once more and show the people reading along that THEY are capable of anything their heroes have done.

7. HOOSIERS – those corn-eating, big-eared jerk-asses. Who the hell do they think they are? What even IS a Hoosier? Ridiculous.

Did that make you laugh?