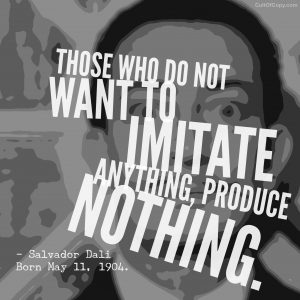 Originality is overrated. Sure, you don't want to be a copycat. But you don't have to be a creative genius, either.

Some other famous mucky-muck once said something like “the secret of creativity is hiding your sources”.

I have an even better strategy.

Make a small list of people you wish you could be like. People who are doing what you want to do, and pulling it off with style.

Now, set about imitating them IN COMBINATION. Use their best bits, but leave out – even specifically disparage – the tidbits you don't like about them.

When you do this, the combination of sources creates something unique. But it also allows you to openly cite them as influences, rather than having to mask or obscure them.

You don't have to even worry about it, though. It doesn't come across as a rip-off because of the combination. People who notice it will point it out with a wink and a nod rather than an accusing finger.

And eventually, your own style will develop from this combination, and you will find that you “imitate” effortlessly – because you're no longer imitating.

You're similar to your influences, but become a thing unto yourself.

So don't fear the looming dread of having to be original, unique, or creative. That fear makes unproductive nobodies out of way too many talented people. The way through that fear is to EMBRACE imitation, and make it work for you.

What are YOUR influences? Can you guess mine?