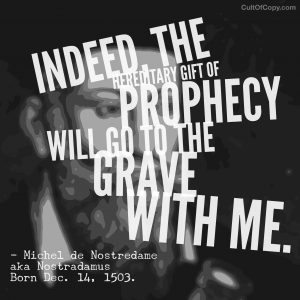 Man, this dude was a genius of bullshittery. There wasn't anything “hereditary” about his “gift” of “prophecy”.

Basically, he would write a metric shit-ton of vague nonsensical poems, and then eventually some real-world event could be bent to fit what he had “foretold”.

That is a con that takes advantage of a fistful of cognitive biases, and it's the reason the dude is famous even today.

But really, what I want to talk about today is the PRODUCT that Nostradamus created and sold: Prediction.

Hell, it goes even farther back to the shaman of the earliest tribes, being able to predict the weather and divine the desires of the gods from signs in nature.

People want to know the right way they are supposed to be living. They have no idea what that is. It stresses them out. They want someone to tell them what that is. The “right way to live” – some people call this kind of knowledge “wisdom”.

Now, in Nostradamus's business, he couched his valuable predictions of the future in the guise of religion. He received visions from God which he was divinely inspired to write out into poems. Very St. John the Divine.

But in our modern context as internet gurus, slash content curators, slash influencers, slash social media moguls… We can drop the pretense of having a supernatural power.

The thing is, people STILL place a HUGE amount of value on being able to make accurate predictions about the future, so they can make the “right” decisions. To be fulfilled and happy and comfortable and whatever.

So make predictions. Look at the events unfolding in your niche and publish a bunch of prophecies of your own. Make a lot of guesses.

Because I'll tell you a secret.

Formerly known only to an old-world clan of nomadic gypsies, who taught it to me in confidence, strictly because I am woke AF.

The secret is: Anyone can predict the future.

Because you can make INFINITY guesses and the audience will ONLY remember the ones you got right, and allow you to dodge the ones you got wrong, forgiving you by forgetting them extremely quickly.

So take a situation, and make multiple contingent predictions. Even if they seem to contradict or overlap. Doesn't matter. All that matters is being able to say “I told you so” no matter what ends up happening.

Over time, your “wins” accumulate. Your “wrong guesses” fall away from memory or interest. You become seen as a kind of predictive genius.

Not a mystical divine vision interpreter. Not a reader of bones or chicken innards. Not a crystal ball peering sideshow worker.

But rather as an expert who can make valuable predictions about the outcome of events that affect people's lives and livelihoods in your chosen niche market. You can tell people what they need to do RIGHT NOW in order to avoid the bad and acquire the good.

When people believe that you can predict the future accurately, people trust you and rely on your advice. Word gets around and they seek you out. People will travel far and risk much for an audience with a real oracle.

If that advice you have for them is “buy certain things I get paid to promote to you” then you can end up making a good living.

Did I explain that well enough? Or do I need to bust out the tarot cards on you?