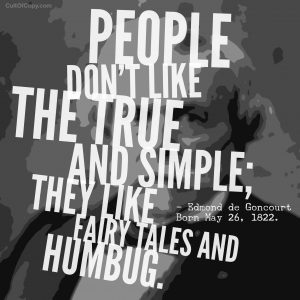 This quote might be easy to mistake for some pessimistic bullshit croaked out by a bitter misanthrope.

But it's really profound if you consider the statement as a commentary ON ITSELF.

The thing is, people appreciate truth and simplicity, but it has to be revealed in the PROPER narrative context.

A simple truth encountered alone will almost always be doubted. “It can't be that simple.” “That sounds good, but life is more complicated than that.” Etc.

The context you must create instead is one of fairy tales – a narrative arc where the all-powerful forces of evil and chaos are challenged and overcome by the underdog forces of good and order.

Take an everyday problem and amplify it to take on the menace of a mythological monster like the Minotaur, hounding your prospects through a psychological labyrinth of troubles and worries and pain.

And once you do, the desire for simple and easy becomes much more believable and urgent. In that situation, whether or not your simple suggestion of a solution is believed to be true or not is harnessed to their HOPE rather than their DOUBT.

Through the beautiful transformative power of humbuggery, you can make the truth desirable. You can refocus people on the simple, and not have them reject it or disbelieve it.

There is a reason tragedy and trauma and hardship will frequently make people suddenly open to the simple “truths” in religion and spiritualism, for example. People with complicated grey areas desire simple truths.

Sidebar – the opposite is true also. If people are surrounded by simplicity and ease, they frequently desire complexity and a challenge to their status quo. But that is a topic for another post sometime else…