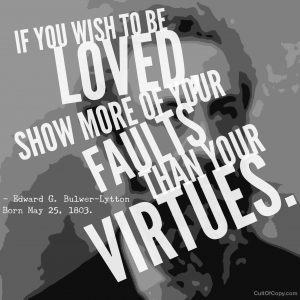 Someone who is perceived to be predominantly virtuous is going to be well-liked. Admired, even.

But also, such people are secretly resented. People always resent their superiors, at least a little bit.

However, people who have a nice amount of virtue, but who are also FLAWED, can come to be truly LOVED by their audiences.

Because it allows them to see their own flawed selves in you.
You are succeeding despite imperfection, and this gives your followers hope that they can do the same.

In fact, if you can often portray yourself turning flaws into favorable outcomes, so much the better. But more on that in a second…

See, showing off the flaws is vitally important because it gives your prospective acolytes a way – however small – to feel superior to you in some aspects. It reins in any rampant fan worship and tempers it.

And you want to do that, because while rampant fan worship might sound cool, the only thing people like more than putting heroes on a pedestal is tearing them back down if they ever prove even the slightest bit disappointing.

So the trick is to have that thread of humanity throughout your messaging because it keeps the pedestal from getting elevated so high that you can't live up to it. And it makes it so that your inevitable missteps and let downs are not a disappointing surprise…

…But rather a fulfillment of an expectation.

People love being right, after all.

And if you can flip a flaw or a mistake into a win like I mentioned before, the narrative is so much richer and satisfying to the audience.

It goes from “Edward used to be 100% awesome, but he really let us down this time…”

…To “Edward messed up, but he is transparent and works hard to make it right and how many people can you say that about?”

Maybe this kind of guru-reputation management is a bit advanced for some of you just starting out on your path to niche celebrity.

But it's something to keep in mind and implement early on in crafting your persona with the earliest followers in your herd. And it will certainly help your efforts to position any of your own clients as guru figures to their own tribes.

The flawed hero is real and believable. While the exaggerated super-heroic expert, who is always right and good and pure, will come across as cartoonish and “too good to be true”.

And while it may seem to work short-term, the truth is some element of any herd will be waiting for the crack in the facade of perfection. All it takes is a tiny slip up and the chisels and ropes come out to drag your shining legacy down into the dirt.

Meanwhile, the flawed yet earnest hero may well stumble, but watch your followers defend you, forgive you, help you improve the failure, and elevate you to higher heights despite imperfection.

Why? Because they come to love you. Not just “like” you.