“The fact of storytelling hints at a fundamental human unease, hints at human imperfection. Where there is perfection there is no story to tell.” – Ben Okri, Born Mar. 15, 1959. 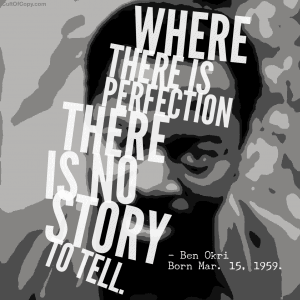 Clients fuck this up when they write about themselves. And sometimes they get mad when they work with a writer who knows better.

I've let clients bully me into making them larger than life and awesomeness stacked on awesomeness until it just comes across like they are not skilled and experienced, but just seem like a braggart.

One time I WAS forceful, and the client took my script and eliminated all the self-deprecating parts during the shoot, so instead of deflating and humanizing her before her audience, it made it seem like she was full of herself and felt she was above her audience, rather than one of them.

Some people can't bear to be portrayed as flawed, or capable of mistakes. In a business context, they fear it will lose them clients.

But the truth is that humanizing yourself by showing your whole story – the dips, the fails, the mistakes, the losses – that is what makes an audience connect with you.

That makes an interesting story. Fuck a story about riches. It has to start in rags. Or even better, have rags in the middle, with riches on either end.

Vonnegut loved this story pattern – starting off neutral, then falling into a negative scenario, which the hero then overcomes, coming out better than before.

And this goes for stories about products, too. Edison famously built shitty light bulbs before he built good ones. Van Gogh's paintings were worthless and unwanted during his own lifetime. Parisians hated the Eiffel Tower and wanted it torn down at one point.

You sucked. You probably still suck in many ways. Sometimes the stuff you make sucks in many ways. But don't hide it. You be the one to point it out. Admit it. Own it. Talk about why it is the way it is and how it's going to be better next time. Then deliver on that.

It's a million times more believable and rapport-building than just pretending you are the awesomest since forever and never mess up.