“The model of ownership, in a society organized round mass consumption, is addiction.” – Christopher Lasch, Born Jun. 1, 1932. 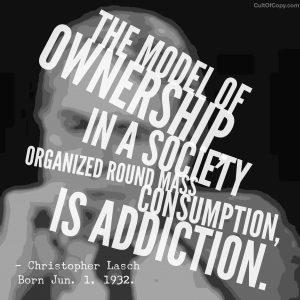 Our culture is pre-conditioned to pursue addictive consumption.

If you don't have young ones, watch some kids programming sometime and pay attention to the commercials.

I'm not saying that's bad. Consumerism is fine if you like making a lot of money. I do.

The advice here then is about how you can make your own offers appeal to the addictive drives we all have in us, waiting coiled like a spring by the constant barrage of commercial messages messing with our emotions.

I know a good shortcut for finding those.

One of the handy things to come out of Catholicism is the concept of the seven deadly sins: Greed, sloth, gluttony, vanity, wrath, pride, and lust.

Now I don't aim to preach here – but what I've come to realize is that the reason these sins are deadly is because A. they are all bottomless desires for indulgence that can never be satisfied, and B. we are biologically predisposed to be weak to their appeals.

So no matter what it is you sell, how can you connect it to these “sins” in such a way that it taps into these deep, irresistible, and insatiable cravings?

Greed is about material gain.
Sloth is about laziness and comfort.
Gluttony is about indulging without consequence.
Vanity is about obsession with how others perceive you.
Wrath is about vengeance and power.
Pride is about arrogance and status.
Lust is about fucking.

Maybe you can't hit them all, but literally every possible idea or thing that a human being can desire for any purpose can be connected to at least one of these addicting drives.

And this is important because when you make the promise that a given purchase will feed one of your prospect's addictions in this way, it helps them take OWNERSHIP of your offer.

It “belongs” to them, internally.

It fits with their whole identity.

Which makes them want to “own” it externally – at least for the brief moment it takes for the purchase to release that little chemical blast of dopamine and endorphins just like all good drugs should.

But buying your shit WILL NOT create that sensation – a sensation buyers CRAVE – unless you harness it to an addiction your buyers have.

And again, thank Catholicism for popularizing a handy list of addictive human drives that are nigh universal.

Use at your own risk and discretion.

You evil cultist, you.