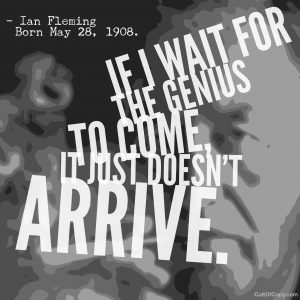 I am going to tell you something right now. When I tell you, you're going to know it to be true. And you can research it and prove that it's universally true as well.⁣
⁣
First, no writer (or any kind of artist) is ever happy with what they ended up with, if it is beloved and popular.⁣
⁣
Because it probably wasn't what they meant to do. And somehow, they were accidentally visited by that magical muse or mojo fairy that makes whatever it is catch on with the public like viral wildfire on crack and steroids with ADHD.⁣
⁣
That makes some arty types resentful. Because we would prefer to be able to perfectly execute our pristine vision and have people love THAT. But it never happens.⁣
⁣
But, do not despair, you artistic souls out there reading this…⁣
⁣
It's also a certainty that the works of yours that you personally love the most will be accidents. They will arrive like a bolt of lightning, sudden and powerful. You won't remember thinking of them. ⁣
⁣
They will come into existence as a combination of planning and forethought mixed with a happy little accident that took things to an even better place you couldn't have thought of before if you spent a million years plotting.⁣
⁣
To take it back to what James Bond's daddy said in the quotation…⁣
⁣
Both the popular favorites, and the secret prides, come from the rogue genius of the fickle muse. But if you aren't WORKING when she pops in to cut you a rail of sweet white Bolivian inspiration, then it doesn't do anything.⁣
⁣
If you wait, it never happens.⁣
⁣
If you work, it sometimes happens. And it will happen more often the more that you work. ⁣
⁣
Look, imagine a simple six sided die like you've rolled in a million games. What will make you roll a six faster: trying to plan how to roll a six… Or just starting to roll it again and again? ⁣
⁣
Are you waiting for a good idea?⁣
⁣
Why wait?