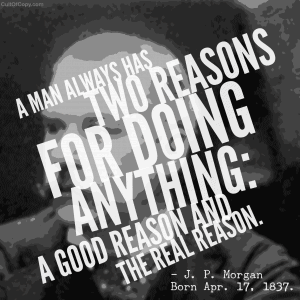 Morgan was talking about parsing the reasoning behind the market moves his competition were making.

But we are going to approach it backwards.

If you want to persuade and influence people to bend to your will, it's always best to give them both of these kinds of reasons, or at least remind them of the reasons they already have that you can capitalize on.

The real reason people do things is usually an emotional one. A deep one. Frequently, it might not even be a conscious one. Typically it's because they are accommodating for some perceived lack or shortcoming in their lives.

And then you prop this up by providing a “logical” and justifiable reason. The kind of thing that is acceptable to repeat to other people. The cover reason. The “good” reason.

If you can describe and explain to them how they can serve both with a single action – to fulfill the real, hidden, personal (perhaps not socially acceptable) reason… But still have a viable public explanation of why they did it… You're that much closer.

No one ever went broke inventing reasonable-seeming human justifications that allow people to indulge in their animal sides without guilt or consequence.