“Those who believe without reason cannot be convinced by reason.” – James Randi, Born Aug. 7, 1928. 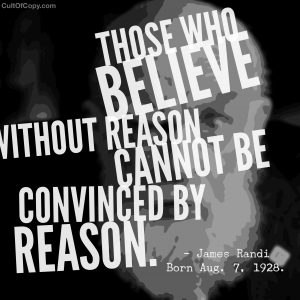 Let's twist this one around a little.

Let's say that if you can get someone to believe in your claims – not by reason, but by emotion and gut feeling – then no amount of reason can talk them out of how they feel.

This is useful when selling things, but in other common scenarios as well.

If you know your mark's values and who they feel are villains, you can get an idea of what they already believe about the world and the way it works.

From there, it's not hard to construct things that FEEL like they would be true, from their point of view. Typically, people don't question information that confirms their existing worldview.

Once they accept the EMOTIONAL truth of a thing, it can be really hard for logic to intrude and dislodge the belief.

Does this sound sinister?

It can be. It’s how people fall prey to conspiracy theory addiction, for example. They have an emotional belief in dark forces secretly oppressing them. Explanations that lack logic, but support that emotional belief, will be accepted.

Once accepted, opposing explanations will be rejected if they don’t support their emotion-based belief about how “true” it FEELS.

But let’s examine what is at work here.

Your logical brain exists as a stop-gap mechanism. It’s meant to help keep you from hurting yourself with emotion-driven behavior, by allowing you to think through the consequences.

The problem is, your internal protective mechanisms can overreact to things and use logic to talk you out of taking any risks at all, even if the benefit might be more than worth it.

For example, not committing to a potentially rewarding relationship out of fear of the possibility of heartache from rejection – or even eventual break-up far in the future.

So your skeptical bodyguard brain tries to use logic to hold you back from making BAD decisions.

But the flaw in your mental programming is that the skeptical protection mechanism can only go to work on the behaviors, plans, and ideas you don't truly BELIEVE in.

If you believe in something deeply and emotionally, your logical brain won’t touch it. It treats it as though it’s proven reality.

That's why persuasion works best when you convince emotionally first.

Once you do, only reason that supports the belief can be allowed in. Reason that refutes it will bounce off.

For example, say you sell a weight-loss supplement. If your prospect has an emotional disbelief in all such products as “snake oil” then no amount of proof will sway their logical mind, because they’ll emotionally believe that these “facts and figures” are falsified to begin with.

But if you can go to work on that emotional belief first, acknowledge it, and reveal that you know why they felt that way. You know how they came to believe it, and justify it. Validate it.

But then shift and explain how that “truth” isn’t universal. It’s not carved in stone forever. And that they should take their valid skepticism and apply it to this NEW material that opens up the possibility of a NEW belief…

That yes, MOST supplements are phony crap because XYZ. But SOME supplements might not be because of ABC. Teach them how to tell the difference. Then, start supplying the logical support that proves YOUR supplement is in the ABC category.

1. If your desired course of action is OPPOSED by an existing emotional belief your prospect has, you need to knock it loose or edit it.

2. We do this by aligning with it, but altering it by introducing an exception that’s still within their current beliefs.

3. Once they accept an exception CAN exist, the logic can be brought in to prove that your desired course of action qualifies.

If this makes sense to you, and you believe you can learn to apply it, you can peel back the barriers of the world around you and begin to chase down what you really want.

Not just in using copy to sell stuff, but in getting everyone to do what you want them to.

Use with caution. Be a good guy.