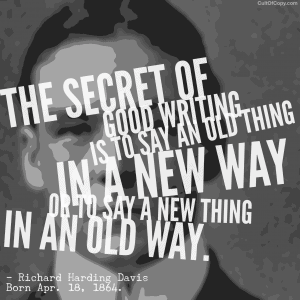 I wouldn't say it's THE secret… But it IS a great trick. Two tricks, I guess. One coming from each direction.

Let me tell you how I use them every day.

1. Can't think of something to write? Take some old adage (or quotation) and come up with some current way to apply it to whatever your topic is.

Kind of like what I do with these daily quote essays.

Or in any of the training and mentoring I do. I have not invented any new ways of understanding human nature. All the ones pertinent to selling people stuff are at least a hundred and fifty years old.

I HAVE thought of a couple of neat ways to DESCRIBE those, though. I have come up with a few effective formulas for applying them, too. Because what has changed is the technology and the tools. Not people.

All that to say, I am not an inventor or innovator. I apply stuff “old” stuff I learned elsewhere, and report back to my audience, and teach what worked for me – thereby creating “new” and unique information.

2. Take some new buzz topic everyone is yammering about and explain it via analogy by comparing/contrasting it with something old and more commonly understood.

Make metaphors and similes and analogies that help people understand these new contexts. The NEW thing is like this OLD thing you already understand…

Copywriting is salesmanship in print.

Do this and you make the anxious and ill-understood imposition of the future comprehensible. Graspable. Exploitable. And that’s very useful to lots of folks. It’s something people will pay you to help with.

Now, you shouldn't rely on one or the other of these two exclusively.

Alternate. Oscillate. Use both interchangeably and in combination, even.

Because this creates an image of you in your audience's mind – you are a nexus of understanding, pulling treasure from the forgotten past – and making the constantly arriving future more manageable and comprehensible.

You’re the savior of the masses in your niche – the edge is always bleeding, and people need help to get it. And the past is always littered with keys to understanding the present – as the future rushes in.

You create a shortcut for their process when you write this way.

And everyone loves a shortcut, and we VALUE the people who can point them out.