“Secrecy sets barriers between men, but at the same time offers the seductive temptation to break through the barriers by gossip or confession.” – Georg Simmel, Born Mar. 1, 1858. 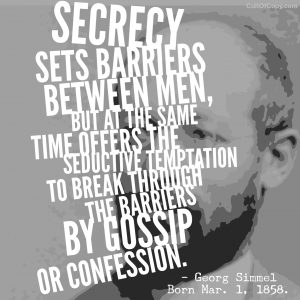 Secrets are power. Sharing secrets can weaken you and allow others to damage you.

Generosity with plans and innovations can lead to disastrous competition. Even coercion and extortion and other nasty things. So HUSH!

…But that only applies to REAL secrets.

You can take nearly any piece of information or advice and twist it slightly, and thereby present it as a recently rediscovered or revealed “secret”.

This makes it much more desirable and coveted by the receiver of it. It's rare. It's elite. It's exclusive.

It gives what was once mere education or explanation and gives it the salacious bent of gossip or confession.

And that makes the receiver feel like they are being empowered, and inducted into an upper echelon of prestige and influence.

They're on the INSIDE now. One of US. No longer one of THEM.

But really, it's just a gimmick of presentation.

Like most gimmicks, it can be overdone and feel fake or cheesy. But clumsy usage doesn't weaken the principle at all when it's well executed.

How to do it well? That's a secret.

*Looks both ways. Leans in to whisper.*

But I will happily tell you for a reasonable sum…