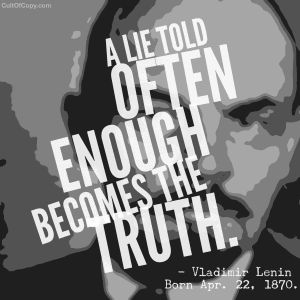 This is a statement that sounds sinister because of how specific it is. If you make it as general as it is in reality, it's not so evil-seeming.

Anything repeated often enough will eventually be believed, not just lies. Anything.

This works for advertising claims.

It works for branding.

It works for offers.

It works for claims.

Repetition can be a really valuable and important tool for creating lasting impressions in people's minds.

It's been said to me that it takes 7-12 repetitions of something before the mark even realizes you're trying to tell them something.

It takes another 7-12 before they internalize what you're saying.

It takes yet another 7-12 before they're bored because you're repeating something they already “know”.

I know that seems like a lot. The trick is that you're not repeating as much as restating, reiterating, explaining, elucidating, extrapolating, etc.

Points you want your audience to absorb and have present in their mind when you speak to them should be repeated. Often, and in a variety of ways.

Repetition can make even lies begin to seem true. That's how powerful it is. It can literally warp mass perception to make the people believe in untruths and falsehoods.

It doesn't take skill or art, or even persuasive arguments. It just takes repetition.

Imagine how well it works with truth and promises backed up by reliability and quality, and all that other good shit your business probably is. Right?

Don't underestimate the power of repetition. Not only can it boost everything else you're already doing, it can help you manage your work more easily over time – repetition means the burden to be fresh and new and innovative is lower.

Can't think of something to say? Take something you said already and say it again in a new way. It works.

Agree? Or do you agree? Perhaps instead, you agree?