“When people approach me about my films it is usually to tell me how much they hate them.” – Michael Winterbottom, Born Mar. 29, 1961. 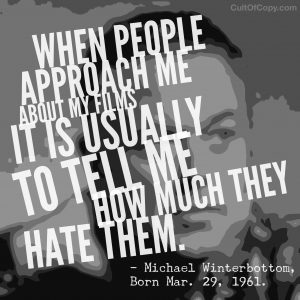 Any time you create anything, there are some people who seem to just want to tear it down because it exists. Because you bothered to try.

I'm talking about haters. And they can get in your head and wreck you if you let them.

First of all, let the fact that you even HAVE haters be a trophy. For someone to go out of their way to shit on your efforts means that you are making an impact and getting distribution outside your circle.

Second, the opinion of the hater almost tells you that you need to do the exact opposite. Because you want to give the hater what they want – more to hate. They don't want to be pleased. You can't satisfy them by accommodating them.

Instead give them more to hate. They won't stop following or consuming. They may even bring more haters to complain alongside them. Good.

Because consider what it looks like from the outside. If you're inspiring passionate response, you must matter. The nature of the response is irrelevant. The presence of haters can actually FORCE ambivalent people to take a closer look.

So don't fear them. Don't let them drag you down. Use them. Plan for them. Whenever you work, give thought to who might hate it, and endeavor to put it in front of them.

Their opinion doesn't matter – but their response very much does.

So. Be glad for haters. Use them for what they are good at, and endeavor to make them madder all the time.

And one final note for the sensitive soul – how to protect your little feelings from the savage slams of an artful hater: cultivate a group of fans.

Don't just let people find you at their leisure. Collect them. Gather them. Put them in groups and on lists. Make sure you're publishing pretty much directly to them and give them a way to interact with you and each other.

Because they are an insulator. They are a protective shield. They can basically act as a counterpoint to give you perspective on how untrue the hater's opinions are.

And when you do get a hater in the midst of that crowd of true fans, they defend you. And the hater's bile pushes them closer to you than they were before. It's no longer them vs. you. It's them vs. US.