“Players like to know that they've discovered things that even the designers didn't know were in the game.” – Will Wright, Born Jan. 20, 1960. 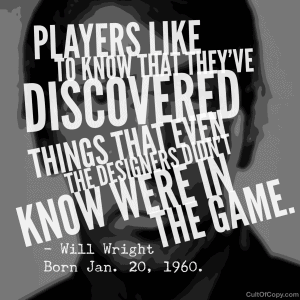 People who grew up in the original Nintendo Entertainment System era have a unique insight into persuasive language.

In particular, an advantage when it comes to the framing of information so that when you share it, it increases future influence, and positioning you as an authority.

See, the NES era was the first time where games were complex enough to have secrets and Easter eggs and hidden strategies and areas that were either required to beat the game, or else made beating the game easier.

(Note: the above is not strictly true historically speaking, but is generally true enough for me to make this point…)

Remember back to the Super Mario Bros. and Legend of Zelda days, where the kid who knew where the warps were was king of the school bus ride home.

He (or she) was the bearer of small tips and tricks and advice that would mean the difference between that game – that fat grey cartridge you wanted so badly – that cost like $70 in 1987 dollars – being an ineffective paperweight, or being a conquered piece of software from which you milked maximum value and social currency.

Now, a lot of times, these secrets and strategies were built into the games by the designers. Either for the player's enjoyment or the developer's ease in testing.

But sometimes, because of the limitations of software and glitches and insufficient user testing before release, there were “secrets” that the programmers never intended. Unfair advantages. What would today be called “hacks” except today, game makers can offer patches that repair these game-breaking sort of “mistakes”.

But man, back when I was a young lad, I used to LOVE knowing these back alleys and secret shortcuts. The obscure ones that some super dedicated player uncovered only through persistence and time.

They transcended the design, like hacking the minotaur's maze with a spool of thread.

And that sensation, that feeling, that belief – that you have outwitted the creators themselves – is AMAZINGLY seductive and satisfying.

And so you should frame your information in this way when you can – as a “glitch” in reality itself, discovered by accident or persistence or both…

All very hush hush. All very illicit. All very much an accidental opportunity for them to take an unwarranted advantage, thanks to you.

And who doesn't want that? A way to “cheat” at life itself without any chance of harm or consequence?

So what are your “cheat codes” for your niche/industry/field? Collect them from other sources, and explore until you discover new ones yourself. And most importantly, share them.

Watch people treat you like the king (or queen) of the school bus when you do.