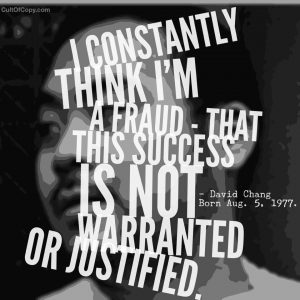 I've had the privilege of being in several high level masterminds with some super rich people – the kind where people air their personal crap as well as their business crap.

And it's amazing to hear people with means, power, and success beyond the dreams of most…

Skilled, talented, attractive, fit, amazing and accomplished people who may as well be super humans…

They pay a bunch of money and come together to talk about how they feel like phonies and they will get found out and lose it all.

Impostor syndrome is a beeeeetch.

But it's kind of heartening to know that everyone gets it. There is no escape.

So I have a little perspective hack I like to use myself, and recommend to others when I'm in the position to give that advice. Here it is.

See: Part of the feeling of being a phony comes from success coming easy. Getting rewarded in a way that feels excessive relative to the effort.

And the reason even successful people can get that perspective is you only remember how easy it is now. You don't remember how hard you had to work to get the machinery of easy success in place.

You worked hard for a long time BEFORE you were successful yet, too. So in your mind, when you were overworking and double hustling, it felt more like you were “earning” it.

Also as you gain more experience and skill in your chosen field, you internalize and become unconsciously proficient with so much valuable knowledge that you had to create through trial and error.

So it feels like you're not doing much. That you're just barely trying and people are reacting well even though it was super simple to do. But you really ARE doing more than anyone else does – you just operate from a place where it is easy – because you've done it so many more times than the average joe has.

You’ve sown the seeds, now you reap the harvest. But we aren’t talking wheat where you have to plant again and again. We are talking blackberries, where you planted a crazy wild weed that grows on its own and you just come pick the fruit.

I hope that perspective helps, but it’s just a band aid. The feeling will persist, so you have to learn to abide it.

Don't spend too much time worrying about what other people think of you. If you need to worry about someone's feelings, care about the people that love you and your work.

Don't waste a second on the opinions of people who don't like you or your work. They have plenty of other options, and you have better people to spend time with.

And if that doesn't work, just remember: nobody deserves anything, and we're all gonna die someday. Enjoy it!