“Trying to do business without advertising is like winking at a pretty girl through a pair of green goggles. You may know what you are doing, but no one else does.” – Cyrus McCormick, Born Feb. 15, 1809. 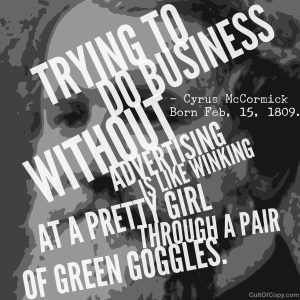 Here is the revolutionary change in the nature of advertising as we begin to really get into this here 21st century.

It used to be that merely PUBLISHING was enough to create advertising – where the message meets the reader and pulls them in.

In the last century, the novelty of mass published items made it so that simply appearing in print anywhere was sufficient to stand out and gain ground over competitors.

Those days are dead as Dixie and disco, baby.

Today, any weenus with a web connection can publish any kind of bullshit. Morons are tweeting and instagramming and snapchattimg and youtubing all kinds of trite shit…

But here is the thing. Also every artistic genius and talented wunderkind is spending all day every day creating and publishing shit for free that is so amazing, no one will pay attention to your dumb advertising.

Even if it's good.

But it's probably not good.

Nowhere near as good as the top thousand free films and fan creations about any and everything, as just one example.

So HOW THEN do you wink and get that pretty girl (or guy or ladyboy or android or whatever you are into) to notice?

Conversations about interesting stuff between interesting people is the purest heroin for the information junkie.

It's fresh. It's relevant. It's new. It's now. It's live. It's interactive. A book or blog or web page or podcast or video can't compete with the direct amygdala tickle of a killer conversation.

So start conversations and actually make some modern advertising. It's unblockable.

You read this, didn't you? Did you like it? Wherever you found this piece likely will have more stuff just like this. Much more. Indulge. Enjoy. Consume.

And when you're ready, I have stuff to buy, too. Even better stuff. You'll love it. No pressure. 🙂