“When a magician lets you notice something on your own, his lie becomes impenetrable.” – Raymond Teller, Born Feb, 14, 1948. 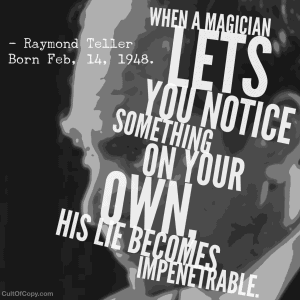 A lot of people think persuasive writing is about what you say to people. Your words push their buttons and they act.

But a lot of times, it's what you DON'T come right out and say that is much more likely to lead to action.

For example, think of the last time you saw a magician perform a magic trick. It can be in person or on TV. Were you delighted to be fooled, or annoyed to be deceived? Were you impressed by the skill, or bored by the juvenile stunt?

You know what I like is when the magician appears to make a mistake, but then it turns out the mistake is just part of the trick. A distraction…

See, like I just did above, you want to draw the broad shapes and let them color in their own details when you can. I asked a question that required you to access your memories.

​​​​​​​Chances are, a lot of the people reading have a specific magical performance in mind – they might even have remembered several.

That's how this trick works.

You want to coax your audience into participating beyond just passively reading or listening to your message.

By leaving specific holes in your stories, you can FORCE the audience to insert parts of themselves into it – they NEED to in order to make sense of it and give it context.

And because heave been tricked into integrating themselves into your narrative, the inverse happens also – your narrative becomes part of them. They internalize it. They take ownership of it.

So the conclusions that the story leads them to feel personal. They feel weighed and measured. They feel reasoned and thought out.

They feel like they made up their own mind.

But they didn't. They merely filled in the colors of their own, inside a shape you dictated. They maybe even feel like they chose the colors, but they picked from the ones you chose to hand them.

And this is literally the best and simplest way to convince people to do whatever you want them to. Let them believe they CHOSE to.

And they are happy you presented them the option to do what they really wanted to all along. So convenient and helpful you are.