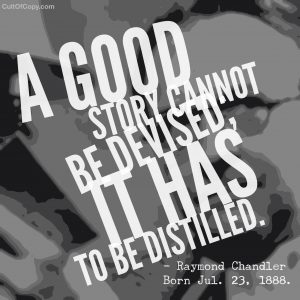 How many people think writers know exactly what they are going to write before it starts coming out of their fingers?

We don't. It would be boring if we did.

Sure, you research and plan loosely. But there is a point at which planning and preparation are useless, and therefore wasteful.

Because once you start producing, it's not going to match a strict plan anymore anyway. That's not how it works.

It's kind of like going out to meet someone to date. You may have an idea of what you are looking for, but you will meet people who don't quite match that – but yet aren't NOT a fit… And these surprise connections might even have appeals you never imagined or considered.

Writing is the same. You can be pleasantly surprised if you just stop devising and start composing as it comes…

It's important to clarify here – I'm not saying you're going to get it right the first time, either. That happens almost never.

The editing and assembly and refining are what will take raw output and turn it into a finished piece. That's the distillation.

But there's nothing to polish if you haven't sawn wood and built a piece of furniture TO polish. You can't distill nothing into anything.

So start churning out the work. As soon as you can. Maybe you're making bits that will eventually be scrap. It doesn't matter. Get it out. Distill it later.

Then maybe it will be a blog, or an email, or both. Maybe I added this sentence later when that happened.

But maybe you're in the future, reading it in book form. You lucky folks are getting the sharper, purer, less-rambling version.

If I had tried to “plan” to write this, I never would have thought of the topic on my own, much less would I have presented it in exactly this way.

Instead, I pick a quote from a famous person born on this day – something that sparks an idea that falls under the umbrella of what I do – of what the Cult of Copy is about, and I just write.

I let it happen. Not devised or conceived until it comes out right now, as I write it, literally minutes before the timestamp says I posted it.

And then later, when I make something more permanent and final out of it, it will be a “complete” work.

If you write for a living, and you need to produce to be paid, I highly recommend you adopt this mode of production instead of planning and devising and thinking things out way too much.

Get to the raw material as fast as you can.

The magic is in the distillation. Most people trying to hack it in this field won't ever PRODUCE material sufficient to distill down into something that does what they ACTUALLY wanted.

But you're different, right? Yeah.