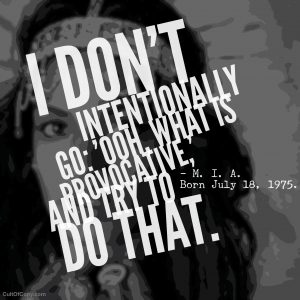 It isn't comfortable and breezy.

It causes discomfort and dissatisfaction. It gives hope and makes promises. It stirs ACTION.

But lots of writers do it wrong, in that they aim to be PROVOCATIVE rather than just PROVOKING.

Not to get all semantic about it, but what I mean is that if you want to be merely “provocative” then you can sit around and brainstorm things you can do to be deliberately provocative and offensive or shocking or whatever…

OR if you would rather actually drive action, and thereby be seen as provocative, challenging, arresting…

To do that, you need to provoke with your words.

Words are weapons and we aren't just here to brandish and rattle them threateningly. We want to slap and jab and poke people.

We want to make the past an insult. Make the present unbearable. And make the future into a nightmare from which the only escape is ACTION. Action that YOU prescribe.

Here are a few ways to not just be provocative, but to provoke action:

1. Point out how people are getting taken advantage of behind their back. This makes them angry, and drives them to rebel.

2. Call people out on their own bullshit. This makes them uncomfortable, and doubt their own present behaviors.

3. Call out the status quo and its agents for being a big bunch of horseshit. This makes people hungry for a change.

4. Chastise other critics of the status quo for being bullshit, too. This helps narrow the field of possible reactions and leaves your option open.

5. Fuck with people's hopes and dreams. Challenge what they THINK they want.

6. Fuck with people's fears and worries. Agitate the things that would trigger fighting or fleeing to where you want them.

7. Portray that you give zero fucks and you do what you want and make it look FUN. This carves a path of possibility in their brain that leads to where they would rather be than where they are now, saddled by struggle and frustration and compromise.

There are more ways, but that's enough for the beginning provocateur.

If you want to make people behave in the ways you want them to, you have to push their buttons. That's how machines work, duh.