“I'm not famous; I am simply very well-known to certain people. Famous is something different.” – Anton Corbijn, Born May 20, 1955. 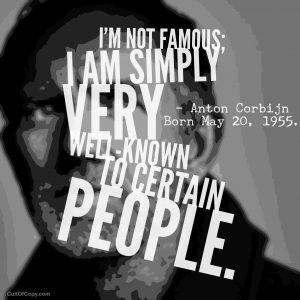 Many seek fame when they get into this game. Some because they truly desire fame for its own sake. But many do only because they think it's somehow required to succeed.

But really, where you should start is in becoming well known to the RIGHT people. Widespread fame isn't spontaneous. You have to build it.

Let me tell you about another guy.

Howard Bloom is a guy who launched the careers of a lot of famous musicians out of the 80s. Madonna, Joan Jett and the like. He used to “seed” these acts from city to city, at the hot clubs, and then go on to the next. He would play them in rotation until they started to get requested, then the acts would never play there again until AFTER the album dropped.

He was essentially making these bands well known to the taste-makers. The hipsters. The people who love knowing what is cool before it hits the mainstream.

I thought about how I could imitate this in my own career.

When I started out as a copywriter, I became well known to the people who were product creation experts. All of their students were in a position to need copy, and I was well-placed to be recommended by their chosen guru, because I had made friends with them at events and in social media groups and forums and such.

And when I launched my own community, those connections and their referrals all showed up to participate and promote it – not out of a business interest, but out of a genuine friendly camaraderie.

Now pay attention to this part: the reason I was on anyone's radar at all is not because I wrote good copy (though I did).

It was because I deliberately pursued becoming very well known to certain people. The right people. Not all of them, mind you. Some turned out to be dicks. But the ones that were cool actually became good friends of mine over time.

When you do that for a good long while, you can suddenly become an overnight success.

No one just spontaneously finds you and puts you on stage in front of your audience. You need to know the people who have their own stages, cajole them put you out to their audiences, and then build your own stage when you have enough people paying attention to fill your room.

That's way easier than trying to appeal to the masses all by your lonesome.