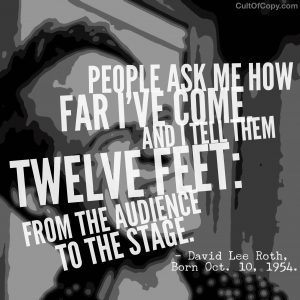 This one is for the little baby gurus out there. The people who want to become a “somebody” in their field, turn their experience and knowledge into content and products, and profit by selling it to an audience of fans…

Many who are ambitious or extroverted are born performers. They can climb up on stage without a drop of embarrassment or an iota of fear.

I wasn't like that. I'm still not like that. Manufacturing my own little modicum of micro-celebrity was terrifying for me.

That twelve feet from the audience to the stage can seem like a canyon of fear so wide that you can barely see the other end.

But you know what? Build a ramp. Strap some rockets to your dirt bike. Put on your little helmet and cape and start revving that engine, you little daredevil, you.

Because I'll tell you a secret.

Because they feel that exact same fear. They see a canyon when it's really three short strides. They doubt themselves. They fear rejection, criticism, responsibility to perform – all of it.

But what I've found is that if you work at building your ideal audience, right where those people actually hang out – you find them, you help them, you build with them and for them…

They are forgiving and encouraging. They multiply. And by the time your “fame” spreads to the world outside your bubble, you've got fans around you creating a wall that insulates you from shitty, negative haters.

The things you fear in the bottom of that canyon are phantoms and shadows only.

And they can't dull your shine, you crazy diamond.

Here are a few simple ways you can help cross that chasm from consumer to creator, and start building your own audience…

1. Consume good stuff. You have to fuel your brain with the stuff that will yield crops of your own. Seek out the quality material in your niche and dig deeper than just the surface.

2. Curate it. Weed out the bad stuff and keep the best bits. Collect them. Cross reference them. Combine them, compare and contrast. Give them a deep think and reflect.

3. Commentate on those gems. Take some sliver of the time you normally spend consuming, and instead, critique some of it. Regurgitate it back out, and publish it wherever you might find receptive consumers. Recommend the good, call out the bad.

4. Create your own stuff. After a while of doing the above, you’ll automatically get an idea of what’s missing in your niche. What’s been left out. What’s worthwhile, yet not getting attention because it’s been overlooked or cast aside. Deliver that, with your own style.

5. Collect your stuff a(and your audience). Provide a place to collect all your content and give fans (and haters) a place to congregate and converse about your topic. Keep adding to the pile and give people a place to binge.

6. Commercialize. Sell stuff. Teach stuff. Become an affiliate. Make your own products. Offer merchandise. Promote ad spots. Whatever. There are tons of ways to profit off of helping your audience get more of what they want.

BONUS: Collaborate. Find people in your field making cool stuff. Do cool stuff with them. Cross-pollinate audiences with each others’ stuff. Find ways to make money and make fans by working together.