“I think it's healthy for a person to be nervous. It means you care – that you work hard and want to give a great performance. You just have to channel that nervous energy into the show.” – Beyoncé Knowles, Born Sep. 4, 1981. 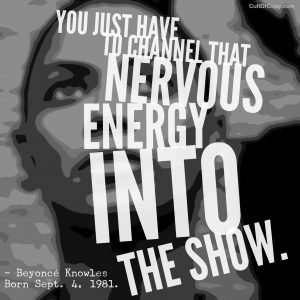 When I mentor people or consult with them, I frequently hear people who are full of self doubt.

If they are beginners, it is a lack of confidence in their own value.

If it's veterans, it's impostor syndrome where they feel overvalued and are worried of being “found out”.

They are both full of shit.

And I say that with love.

You think your nervousness and self doubt and lack of confidence EXCUSE you from trying?

I don't see a doctor's note for that, people.

You have to dress out and run your fucking laps anyway.

Run them while you’re nervous. Yeah, you might trip or go slow or otherwise fuck up.

You're still ending up yards or even miles ahead of the cowards who DO allow their nervousness to get in their way.

So stop being a little coward.

What are you scared of? Succeeding?

Or else improving slightly toward an eventual success?

Because those are really the only two possibilities.

Either the thing you attempt works when you try it. Or else you learn something about how not to do it next time.

There is no such thing as failure. Just a test result. Positive or negative. If negative, adjust and retest.

Like Queen B says. Nervousness and self doubt mean you actually care about what you're doing. That's ingredient number one in being fucking awesome.

Ingredient 2 is getting out there and rubbing your awesomeness against every surface of the world that you can.

Do it. Tell me how you will. Then SHOW me.