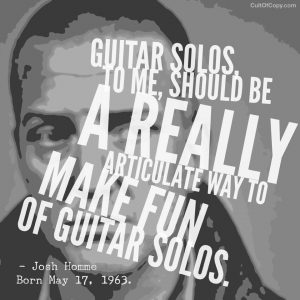 Let me tell you what the most valuable thing is when it comes to making yourself into a lasting – even generational – personality, loved and admired by an ever growing audience.

If this one thing is missing, your carefully crafted persona will begin to grate over time, and wear on even your biggest fans.

Many people make the mistake of leaving it out, because they think it weakens them. They feel like they won't be taken seriously, or won't earn the respect their ego demands they claim for themselves.

But really, this ingredient makes your celebrity and authority flexible and adaptable, while practitioners that skip it are building a foundation the falsely believe is more fortified – but it's actually brittle and bound to crumble to rubble.

It's a self-deprecating sense of humor.

Not just about yourself, but about your work, your guruhood, everything. You must portray – and it helps if you actually believe – you are not so great that you aren't full of shit sometimes.

Someone pointed out to me once that they consider me a marketer that also satirizes marketing “tricks” even while I am using them.

I hadn't ever thought about it that way, but it's definitely true. It's one of the reasons I can “get away with” some of the things I do that most people would say is a bad idea for a business owner to do.

When I break the “rules”, I do it with a wink, and with the side goal of getting some laughs. And this serves a particular purpose.

For the people in your industry that want success, but find it intimidating to attempt – this helps them.

To show that someone who is succeeding in the manner they would like to, but who is also having fun, and is not some kind of serious, obsessed, humorless machine?

This makes their challenges seem a little less daunting. And that makes you seem like a good candidate to help, since you're obviously enjoying yourself and not getting caught up in absolutes and minutia that freak out beginners and slow starters.

So whatever it is you do – your chosen excellence – the lynchpin your authority is built around… Have the balls to joke about it. Joke about you. Make fun of your industry. Make fun of the winners and the losers. But do it WHILE you actually do the work.

Because it makes you unassailable, and in addition to reducing the intimidation of newbies, it also gives experienced veterans who are following you a ton of inside jokes and community building camaraderie that benefits you as well.

Try it. Try admitting you're full of shit, no matter how alpha you are. Your audience will eat it up, and you'll get new fans, too. There is literally no downside…

Except maybe humorless dorks might not like you as much. But fuck those guys. They're no fun to interact with anyway.